Kids may find more than adults in the far-fetched children’s fantasy Four Kids and It.

Thirteen year-old Ros (Teddie Malleson-Allen) is a bookworm, with aspirations of becoming a writer. But she’s yet to find her own voice. She, and her younger brother, Robbie (Billy Jenkins), are good kids – being brought up by their British father David (Matthew Goode) because their mother left them to find herself. Teenager Smash (Ashley Aufderheide) – a nickname for Samantha – is perpetually angry and seemingly loves to defy the authority of her American mother Alice (Paula Patton).  She longs to spend time with her father in the Seychelles. He’s run off with a younger woman. Smash also has a cute little sister, Maudie (Ellie-Mae Siame). The four kids don’t know each other, although the parents most certainly do. 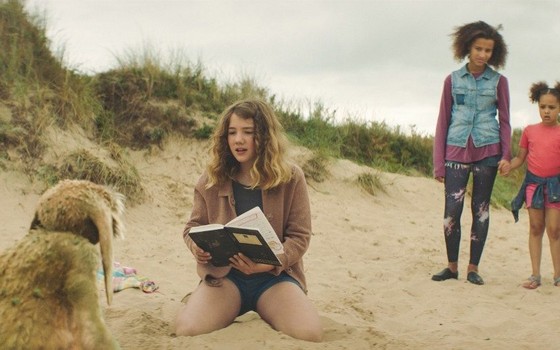 They have been dating in secret; and drop this bombshell on the kids. At the same time, they decide to take the quartet on a small holiday break by the sea to get to know each other. Let’s just say the kids are hardly enamoured with the idea. But all that changes when they encounter a large, old, grumpy, toad-like creature with droopy rabbit ears – known as a Psammead (Michael Caine) – who lives buried in sand. They keep “it” from their parents.

The Psammead has the ability to grant one wish a day (with the caveat being these wishes run out at sunset) – reluctant though “it” may be to do so – and then the kids begin a series of wild adventures. Also showing a particular interest in Ros is a wacky loner, Tristan Trent III (Russell Brand), who lives in a large nearby mansion. But what is he really after?

Four Kids and It was inspired by Five Children and It, a turn-of-the-20th-century children’s classic by English author E. Nesbit. Screenwriter Simon Lewis (Tiger House) adapts the novel for the screen from Jacqueline Wilson’s 2012 bestseller Four Children and It. Andy De Emmony (West is West) directs.

Adult viewers will have to suspend belief and then some. I can only imagine kids would have that ability. The whole thing looks and feels forced. The exaggerated acting and contrived fighting undermine an already shaky plot.

The only one who can really get away with it is Russell Brand. But then he’s known for pushing the envelope. Mind you, I didn’t particularly care for him either.

I can only hope the target demographic will regard this as fun.