What is it about Buffalo? The city on the shore of Lake Erie in western New York seems to provoke an uneasy blend of love and loathing in its residents – at least the ones who make movies. Like Vincent Gallo’s Buffalo 66, Buffaloed (a prologue explains the title) from Tanya Wexler mixes a fierce pride for the Rust Belt city with a cringing recognition of its hokiness. The result is an amiable film that, like its protagonist, tries really hard but sometimes comes up short.

Brian Sacca provides the script for Wexler, which unfortunately runs into some problems in the third act. The film apparently aims to be a kind of Big Short-lite, complete with winking asides to camera. And while it’s also set in the general world of finance, this is a far grittier experience. 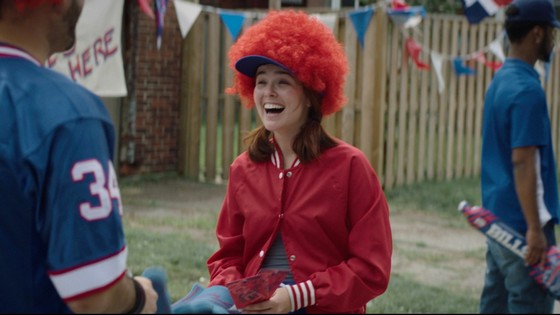 Our hero is Peg Dahl (Zoe Deutch), a go-getter with big dreams. But her big dreams land her in jail after she tries to make a quick buck scalping fake sports tickets. Following her release, her supportive but clueless mum Kathy (Judy Greer) tries to set her on the straight-and-narrow. That all goes out the door though when Peg meets Wizz (Jai Courtney), the city’s “best” debt collector. Wizz introduces Peg to the “tricks” of the mostly unregulated trade, and she embraces this new money-making opportunity. Soon, Peg’s making bank like never before. But of course, she’s crushing a lot of hopes and dreams to do so.

Unsurprisingly though, the cops are on the lookout for any illegal activity. Soon a task force led by local prosecutor Graham (Jermaine Fowler) is sniffing around Wizz’s business. Graham – who had prosecuted the ticket scam case against Peg – sees her as a potential “in” to Wizz’s business. Things take a turn when Peg and Graham become romantically involved. But can Peg’s gravy train really roll on forever?

Although Buffaloed has the feel of a true story, actor-turned-screenwriter Brian Sacca wrote the original screenplay. The script initially has a lot going for it, but soon cracks appear. Although it ticks a lot of “screenwriting 101” boxes, the key relationship between Peg and Graham lacks credibility. Graham – despite being a lawyer – doesn’t seem to even recognise (let alone care about) the massive conflicts of interest he creates. And you have to wonder what he sees in the mercenary Peg. The screenplay tries to paint her as a good person caught up in a bad situation; but then has her revel into those very same bad situations. Wizz becomes almost a caricature of a financial bottom-feeder, rather than a true antagonist. The film ends up feeling as though it doesn’t know what it thinks of these characters.

Sacca also allows the third act to drag on with a series of false endings, which I found frustrating. And like all films set in Buffalo, it features the city’s NFL team, the Buffalo Bills, in a couple of key scenes. It also features several references to “pizza and pop” parties, which apparently are a thing in Buffalo.

For all its flaws though, Zoe Deutch (Zombieland: Double Tap) just about gets the movie over the line with a compelling central performance as Peg. She brings a driven intensity that really fleshes out the character. Deutch is so magnetic in the role, many of the other characters struggle for space. That’s especially true of Jermaine Fowler and Judy Greer, who aren’t treated well by the script. At least Greer looks like she was having fun as Kathy. Australian Jai Courtney (Storm Boy) gets to “go large” as Wizz, and really throws himself into the role.

I think of Buffaloed as a kind of low-rent Wolf of Wall Street. If you loved Martin Scorsese’s parable of greed and loathing, you’ll probably find something to tap into here. This is rather shabbier, and not as well constructed, but for a Friday night couch movie, you could do a lot worse.