This revisit of Halloween from the ‘70s features a good story – and it’s genuinely scary. 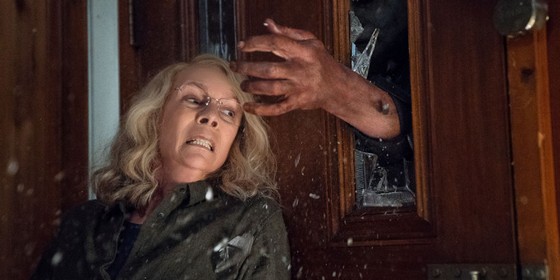 \In this Halloween, Jamie Lee Curtis returns to her iconic role as Laurie Strode, as she comes to her final confrontation with Michael Myers. He of course is the masked figure who has haunted her since she narrowly escaped his killing spree on Halloween night 40 years ago.

John Carpenter, who directed the original, executive produces and serves as creative consultant on this film. He joins forces with cinema’s current leading producer of horror, Jason Blum (Get Out). Inspired by Carpenter’s classic, writer-director David Gordon Green and co-writers Danny McBride and Jeff Fradley have crafted a story that carves a new path from the events that took place in the 1978 picture.

Curtis is joined on screen by Judy Greer (Jurassic World) as Karen, Strode’s daughter who was taken away from her when Karen was a child. Newcomer Andi Matichak stars as Allyson, Karen’s teenage daughter who is attempting to navigate the rift between her mother and grandmother. Will Patton features as Officer Hawkins, who was a young cop the night Michael Myers was taken into custody 40 years ago. Haluk Bilginer is Dr Sartain, the psychiatrist who has overseen Myers’ incarceration for decades.

After all this time and against the wishes of his psychiatrist, Myers is being moved to another facility. Laurie remains traumatised by what he did to her all those years ago. She’s heard the move is imminent and that brings all the old memories flooding back. But the move goes horribly wrong (there’s a car accident) and suddenly Myers is on the loose again.

First up, let me say a lot more people die in this than did in the original. Secondly, you need not have seen the original to make sense of Halloween 2018.

A no-nonsense Jamie Lee Curtis remains the driving force. I built an affinity for her, for her estranged daughter, and more particularly for her granddaughter. Another engaging character is Dr Sartain, the psychiatrist who’s tried to get a read on Myers for decades. And then there are the pair of investigative journalists who are out to shed new light on the notorious monster and his motives.

Finally, there’s Myers, the sadistic mask-wearing killer. He doesn’t have to say anything to shock and scare you.

This is edgy, sometimes comedic, horror movie kept me involved and excited.