When Australian filmmaker Robert Connolly directs a feature film, audiences pay attention. His latest is The Dry, and this thriller doesn’t disappoint. Based on Jane Harper’s novel of the same title, The Dry powerfully depicts a community in crisis.

Connolly’s previous feature, Paper Planes (2014) proved a surprise hit, and there’s no reason The Dry can’t do the same. Working from a script he co-wrote with Harry Cripps, Connolly crafts a taut thriller. The film cleverly crosses time periods to explore two tragedies that might be linked. But this isn’t “just”a police procedural. It grapples with something deep in the Australian pysche – our relationship with the natural environment. This is of course nothing new – many Australian films explore this often-fraught relationship. But Connolly manages a fresh and technically remarkable take on the theme. 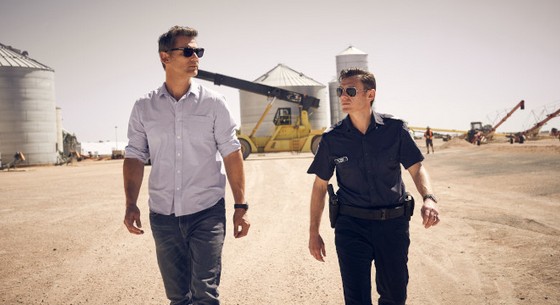 The main thread of the story concerns Australian Federal Police detective Aaron Falk (Eric Bana). He’s returned to his hometown of Kiewarra (real-life Horsham in Victoria) for a funeral. It seems his boyhood friend Luke Hadler has wrought a terrible tragedy – killing his wife and son before taking his own life. But Luke’s father Gerry (Bruce Spence) thinks something doesn’t add up. He urges Arron to stick around after the funeral to look into things. Reluctantly Aaron agrees, and tags along with rookie local cop Greg Raco (Keir O’Donnell) to see what might turn up. This also allows Aaron to re-kindle an old flame in Gretchen (Genevieve O’Reilly).

Meanwhile, Arron’s presence in town has stirred up old resentments. Grant (Matt Noble) blames Aaron for the death of his sister Ellie (BeBe Bettencourt) many years earlier. Aaron, Luke, Gretchen and Ellie had been friends when they were teenagers. On the day Ellie died, Aaron said he was with Luke when she disappeared. Grant thinks that’s a lie. The fact Aaron and his father left town soon after only inflames Grant’s suspicions. Naturally, the whole town is on edge. But the the fact the community has been in the grip of a punishing drought for a decade only heightens the tensions.

The Dry works on a number of levels. First off, it’s a quality Australian film, and that should be celebrated. Its exploration of relationships in a small community is pretty much spot on. I suspect for many Australians, these characters will resonate in lived experience – they did for me. And as a thriller exploring an unspeakable tragedy, it ticks a lot of boxes. It’s certainly a police procedural in parts, but at times veers into neo-noir territory. That Australians can produce a film of this depth and intelligence augurs well for the future of the industry in this country.

One small quibble though is that the situation struck me as a bit contrived. Even the strained resources of Victoria’s police service would not leave a solo country cop to deal with a crime of that magnitude. Perhaps we’re used to seeing this in American movies (notably Westerns), but even so it seems unlikely. Also, the characters seem to ignore the basics of forensics, at least as revealed by the ending. Still, The Dry isn’t really about the police work, it’s about the people.

Eric Bana (King Arthur) predictably commands the screen as Falk. It’s brilliant to see him back in Australian films, and he doesn’t disappoint. Genevieve O’Reilly (Tolkien) more than matches Bana in the acting stakes as the supremely confident Gretchen. Keir O’Donnell too is excellent as the under-pressure local cop, while Matt Nable gives an eye-catching turn as Grant Dow, Ellie’s brother and a suspect in the more recent crime. The surprisingly large cast also includes Miranda Tapsell, John Polson and all-round legend Bruce Spence.

Connolly keeps a tight rein on things, building the film layer by layer. While Connolly takes his time in getting to the final resolution, he doesn’t waste a second. Every scene feeds into a larger narrative palette. DOP Stefan Duscio (The Invisible Man) captures the landscape and characters evocatively. The production team handle the contrast between the “dry” of the film’s present and the “wet” of its scenes from the past brilliantly. And the music score by Peter Raeburn perfectly complements Connolly’s moody atmospherics.

The Dry is a gripping thriller. Forget that it’s an Australian film – this movie holds its own against anything Hollywood could produce. Definitely a film not to miss.