The ancient and modern worlds collide in the special effects action blockbuster Monster Hunter. Based on a video game series of the same name, the plot – such that it is – is basically inconsequential. It’s merely an excuse for non-stop fighting and a legion of monsters to test and retest the limits of human endurance. In short, ugly creatures run riot for the best part of 100 minutes. Their adversaries – the few that survive – are pounded, slashed and burned to within an inch of their lives. 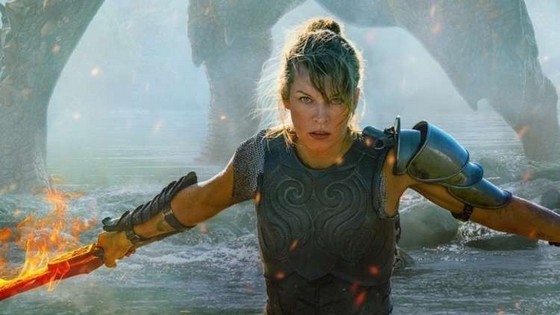 Nearly 20 years ago, writer/director Paul WS Anderson and Milla Jovovich teamed up with a video game company to produce Resident Evil. Six movies and more than a billion dollars later, that franchise stands as the most successful videogame adaptation of all time. While popular globally, it proved especially so in Asia. Now the team behind Resident Evil has reunited for Monster Hunter.

The concept is that behind our world there is another – one of dangerous and powerful monsters that rule their domain with deadly force. An unexpected storm transports veteran army ranger Captain Artemis (Jovovich) and her unit to this parallel world. The soldiers are shocked to discover that the terrifying monsters are immune to their firepower. In their desperate battle for survival, the unit encounters a mysterious hunter (played by martial artist Tony Jaa), whose unique skills allow him to stay one step ahead of the powerful creatures. As Artemis and the Hunter slowly build trust, she comes to understand that he’s part of a team led by the Admiral (Ron Perlman). He’s seen bad things happen when those from the our world cross over to their world. They join forces for the ultimate showdown.

Credit, where credit is due, Jovovich looks a million bucks and more than holds her own. Jaa, too, makes a fair fist of things as her nimble and ingenious sparring partner. Perlman puts in a late appearance, but isn’t asked to do much.

The dialogue is sparse. It’s a case of actions speaking louder than words. The CGI and soundscape are the big winners though. So, if fast and furious video games are your bent, you may find enough here to satisfy you. For everyone else, a half hour should suffice.