If you want a profound understanding of what inspired JRR Tolkien to write The Hobbit and The Lord of the Rings, you should look elsewhere. While Tolkien gives some insights into his creative mind when it comes to whole new languages, it’s essentially a tale of heartache and love. 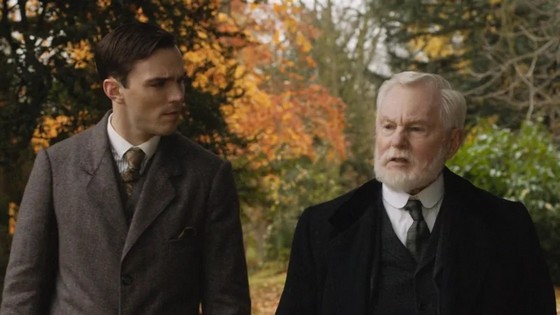 It unfolds as a dramatic and romantic period piece. The movie explores the author’s formative years. Raised by a devoted and imaginative mother who died tragically when he was only 12, Tolkien was left to carve his own precarious path. He has to find friendship, courage and inspiration among a fellow group of writers and artists at school. Their brotherhood strengthens as they grow up and weather love and loss together. That includes Tolkien’s tumultuous courtship of his beloved Edith Bratt (Lily Collins). All of these experiences would later inspire Tolkien to write his famous Middle-Earth novels.

Most of it is unveiled in flashback as Tolkien (Nicholas Hoult), struck down by a high fever, is wandering through the trenches of the Somme during WWI looking for his best friend.

While Nicholas Hoult tried to make Tolkien his own, he didn’t leave the indelible impression of the young man I would have liked. I thought his impact could have been stronger. Lily Collins makes more of a mark as Tolkien’s love interest – a gifted pianist stuck in a lacklustre existence.

I knew nothing of Tolkien’s back story, so I found this take sad and involving. It has a strong British sensibility in terms of its sets and settings. The take-home is that while the odds may be stacked against you, your true nature and character will eventually win out.