Killing Ground is part of a long tradition of Australian cinema, which delves into our sense of unease in our own backyard.

When young urbanites Ian (Ian Meadows) and Sam (Tiarnie Coupland) go camping, they arrive at their isolated destination to discover a tent already set up, but no sign of its owners. With the other campers at large, Ian and Sam’s discovery of a child wandering alone sets off a terrifying chain of events that will push them to their limits. 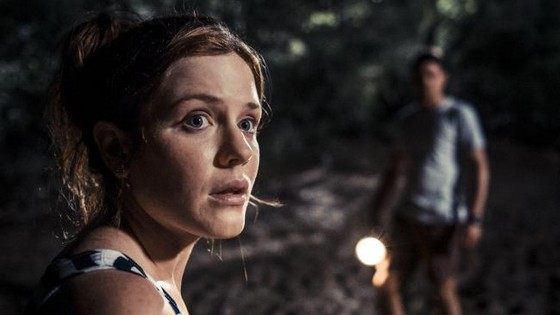 Writer/director Damien Power says it all began with the image of a deserted tent, which appeared to him so powerfully that it demanded a story.

“Thinking about what might have happened to the tent’s missing occupants reminded me of the scary stories we tell around a campfire.” He says Killing Ground was inspired by classic survival thrillers of the ‘70s. “I believe the best films, including genre films, spring from something personal and deeply felt. Killing Ground was born out of my fears for my children and my anxieties as a parent.” While he regards the film as a violent story, it is also a story about violence – about what it does to its victims, perpetrators and viewers.

Yes, it has a very nasty edge to it, but the establishment of the two central characters is unconvincing. Their banter doesn’t feel at all natural. And the dialogue throughout, from all the characters, is dull and questionable. Yes again, unease permeates the film from the get-go. But while all the pieces may be there, drawing them together appears clunky and amateurish.

The tension grows appreciably when bad things start to happen. Some of the plot twists are clever, although even at that juncture I couldn’t escape its wooden execution.

It’s nice to see Aaron Pedersen playing a baddie for a change. He is arguably one of the best things about the film, for he can indeed act convincingly.

The cinematography is nothing short of spectacular. Pity then that notwithstanding a harrowing plot, the final result felt like a compromise – a letdown. Rated MA, Killing Ground scores a 5½ out of 10.