Rainbow’s End is a play by Jane Harrison, author of Stolen (1998). Both of these plays have become part of the school HSC syllabus. Rainbow’s End, written in 2005, is an evocation of the lives of three generations of First Nation’s women: the Yorta Yorta nation, in the 1950’s, in the northern Victoria region of Shepparton and Mooroopna, on the banks of the Goulburn River. It is the gentle and tender telling of some social studies indigenous history – women seeking justice by voicing the need for better housing for their families, and finding that power through the opportunity of better education. 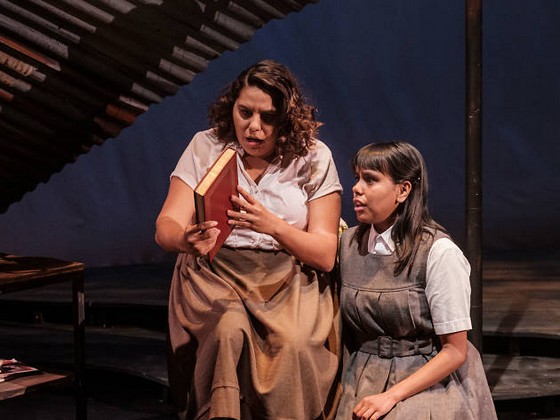 Nan Dear (Lily Shearer), the matriarch of the family, holds firmly to the status quo, fearing the loss of all if the family become to conspicuous in their seeking better conditions. Her Daughter, Gladys (Dalara Williams), a highly intelligent and ambitious woman, handicapped with a lack of a proper education (she cannot read or write) pursues the rights of her family and attempts to guide her daughter, Dolly (Phoebe Grainer), to opportunities that will give her agency for self-realisation. Amidst the action of the narrative we meet, the deadening effects of the wilfully ignorant, racist government representatives, all inhabited by Frederick Copperwaite. As well, a young white salesman, Errol, played by Lincoln Vickery, falls in love with Dolly, adding complication (serious and amusing) to the situation.

The dramaturgy, by Jane Harrison, is anachronistic in formula and style. It is as if it were written in the 1950’s, with short linear scenes of naturalistic action. They’re handled by the director, Liza-Mare Syron, in an unimaginative period style. A dated design approach by Melanie Liertz causes an unbearable number of entrances and exits up and down a series of platforms, lit empathetically by Karen Norris. The play and direction reminded me of the Clare Watson clumsiness in the current production of The Torrents for the Sydney Theatre Company – an actual play written in 1955.

The acting is also handicapped with a wide variation of ability, from a superficial ownership of character from Ms Williams and Ms Grainer – mostly simply mouthing the textual responsibilities, to a tentative line dropping; and ‘cardboard’ ownership by Ms Shearer in the pivotal role of Nan Dear. It’s a very curious experience in a contemporary theatre and is at tremendous variance with the recent Sydney Festival production by Ms Syron and the Moogahlin Performing Arts Company of The Weekend by Henrietta Baird.

Rainbow’s End is interesting for the telling of a very important social history. A friend who recently became an Australian citizen found the experience educational. But the formula created by the writer is so old fashioned that it hardly merits attention, except as museum theatre, from regular theatre-goers. 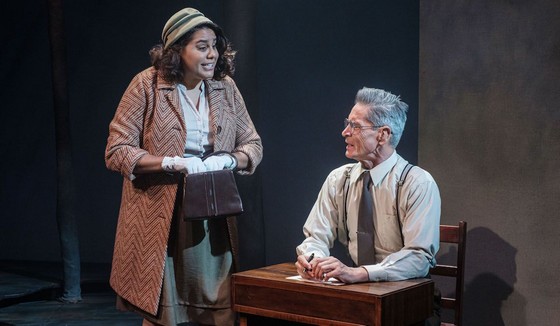 Up at the SBW Stables Theatre now is a very important and passionate contemporary First Nations play by Meyne Wyatt: City of Gold (not to be missed). The Weekend, The Battle of Waterloo, Barbara and the Camp Dogs, and some of the output of Nakkai Lui represents the present maturity of Indigenous theatre writing and production now. This contribution by Rainbow’s End to the conversation in contemporary times feels very oddly dated.

Rainbow’s End by Darlinghurst Theatre Company in association with Moogahlin Performing Arts, is playing at the Eternity Theatre, Darlinghurst until 1 September 2019.