Maggie Stone is an Australian play by Caleb Lewis. It was written eight years ago. This is its first outing in Sydney.

Maggie Stone (Eliza Logan), a let-herself-go, middle-aged lower rung corporate slave – small loans officer – struggles to maintain an equilibrium of pleasantness around the ‘service’ she’s meant to dole out. Coming from a past that sat in the fringes of criminality her tolerance for everyday courtesy is severely impaired, for, from where she comes, calling a spade a spade was the usual no frills manner that unequivocally worked – saving time and effort. Her job is on the line with two complaints racked up against her – one more chance is left. 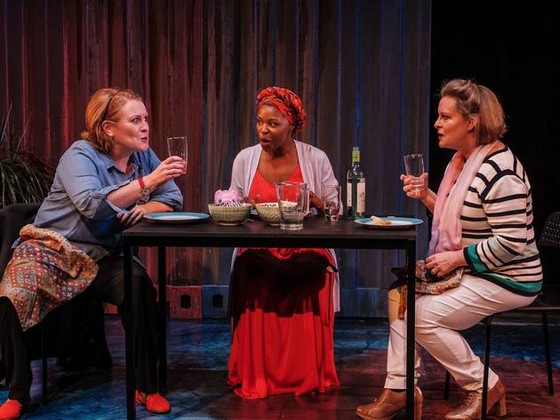 Enter Benedict Deng (Thuso Lekwape), a Sudanese refugee, who, seeking a small loan is rejected by Ms Stone, during a session where she is eating her lunch from Maccas and is slightly distracted and therefore pissed off – ‘it’s my lunch break, for God’s sake!’ Her decision is by-the-book but could have been given – I mean, if you’re pissed-off, you’re pissed-off! Right? He leaves and foolishly pursues the wrong means to meet his needs. This brings his wife, Amath Deng (Branden Christine) and angry son Benny Deng (Thuso Lekwape) into her arena of consciousness and has her conscience and sense of human charity, unusually, aroused. Is it her sense of physical mortality – Col’s and her own – that blows that small flame into a fire of action?

Set in Melbourne, we meet a world of refugees – Sudanese and Syrian (Amath, played by Kate Bookallil) – all trying to honestly get their lives moving in small business, some having to resort into the ambit of petty criminals, in this instance, a money lender, Leo Hermes (Alan Dukes), who takes cruel fiscal advantage and makes tough debt demands that result in fear, terror and death. It is a dramatic co-incidence that Leo is an acquaintance of Maggie.

The hard-won ‘charity’ offered by realist Maggie to Amath Deng is contrasted to the White Christian Charity of a privileged do-gooder, Georgina Spack (Anna Lee). The play begins as a kind of comic-satiric observance that shifts, in its no-interval 90-minute length, into tragedy with a serious intention of social critique glimmering through the construct.

I enjoyed the journey and was pleasantly surprised with the deft turns in mood so as to accommodate Mr Lewis’ plot and thematic concerns, which have some real pertinency for us, today. Despite the fact the play is eight years old, it seemed spot-on, unfortunately still, in the urgency of its conversation concerning race and class prejudice, the plight of the refugee, the morality of cultural and human survival in a profit-driven world, and of the motivations and dignity of charity, for both the receiver and the giver. It takes courage to receive charity says one of the characters – that set me watching the events of the play through an entirely new lens. 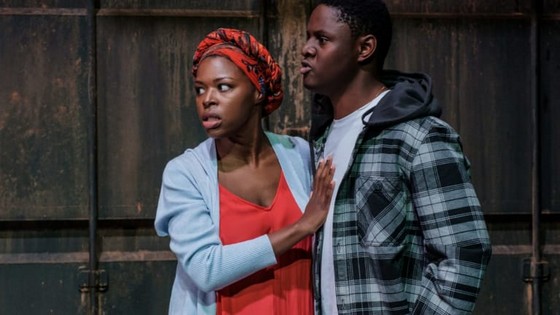 All the performances coaxed from the actors by director, Sandra Aldridge, had the clear focus of ‘function’ that each character represented in the schemata of Mr Lewis’ writing, with the addition of a light but right depth to back-story ‘method’ identification and ownership for us to be able to believe in them and the story to absorb the dramaturgical sociological critique with ease. The design, by Sallyanne Facer, facilitated the swift changes of location on the broad width of the Eternity Theatre stage, assisted particularly well by the lighting design from Matt Cox and the composition and sound design of David Bergman.

Maggie Stone is a recommended night at the theatre. It’s showing at the Eternity Playhouse, Burton St, Darlinghurst until 21 October 2018.