The New Theatre is presenting a revival production of Jonathan Biggin’s 2012 comedy, Australia Day. It was first seen in the Drama Theatre for the Sydney Theatre Company in 2012. 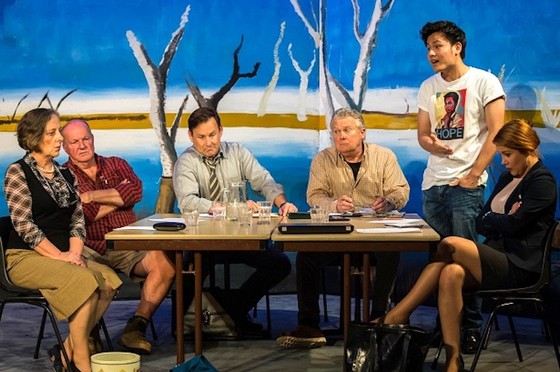 Australia Day is set in the local community hall in a country town called Coriole. Says, the director of this production, Louise Fischer, a girl from the country:

When I first read Australia Day I was transported back to my misspent youth. I recognised the people that inhabited the world of Australia Days, the Wallys, the Brians, the Mariees. They are funny, flawed, feisty and sometimes not very nice. But they are human, they have hearts and intentions that, whilst maybe misguided, are meant well. When working with the actors on this play, I wanted to find truths rather than caricatures. It is easy to see this play through the prism of satire but I think the residents of Coriole deserve a little more than that and I hope that is the story we bring you tonight.

And that is what Ms Fischer has given us. Her well chosen company of actors: Les Asmussen (Wally Stewart), Peter Eyres (Brian Harrigan), Alice Livingstone (Maree Bucknell), Lap Nguyen (Chester Lee), Martin Portus (Robert Wilson) and Amelia Robertson-Cuninghame (Helen), have an authentic look about themselves and a typical laconic Aussie essence that with the no fuss, even rough-edged production, turns, from memory, what I saw at the STC as a caricatured satire into a gentle and accurate unresolved comedy of really ordinary human beings blighted with half-baked philosophies laden with superficial prejudices muddling their way through a changing and bewildering world. It felt sadly, but funnily, ‘real’. 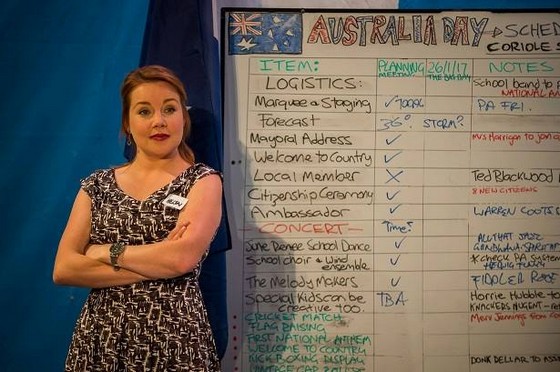 I think I heard more of the debate that Mr Biggins poses throughout the play, and certainly embraced the characters with a warmer reception than I did last time I saw it at the STC. There is clumsiness in some of the scene shifts of act one but, generally, the Design elements, David Marshall-Martin with his Sets and Ms Fischer with an eye-out for the Costume look, the Lighting plot by Nicola Block combined with a very verbal Sound Design from Mehran Mortezaei bring a simple honesty to all that is offered.

Australia Day was much appreciated, by most, on the night I saw it.