A Midnight Visit is an immersive theatrical experience that combines dreams and whimsy with performance art. I spent a thoroughly enjoyable couple of hours visiting three dozen specially decked out rooms inside an abandoned North Melbourne warehouse, dubbed the House of Usher.

In the anteroom (representing a funeral home) an undertaker expresses his condolences for lost loved ones before you’re let loose to explore. You’re given a surgical mask and told not to speak during your tour. The reason for the mask is a tuberculosis outbreak. Death is in the air. 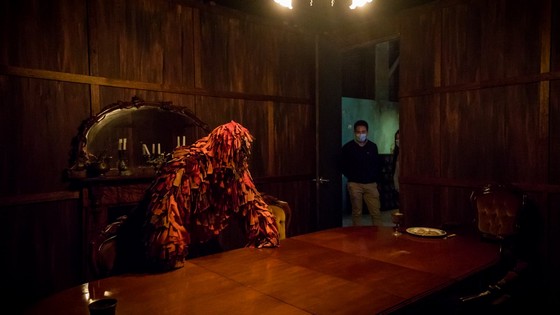 There are some similarities to an Escape Room, except there are no real clues here. Also, an Escape Room won’t have the diversity of experiences that you get here. I’m loath to say too much about the rooms themselves for fear of spoiling the surprise. But there’s everything from a Victorian-era bedroom to a space filled with evocative black-and-white portraits. You move from a graveyard to a room where there is a sea of bright plastic pink balls to plunge into.

A Midnight Visit combines the weird, the wacky and the wonderful. It’s a combination of music, dance, theatre, circus and burlesque. The macabre ideas explored by Edgar Allan Poe were great stimuli for those behind A Midnight Visit, which explores madness, guilt, death, impermanence and memory. However, don’t think you need to be familiar with Poe’s stories or poetry to enjoy the experience. And you don’t have to figure out what you’re seeing. Just appreciate it for what it is – a zany mind bender.

If you want you can choose to follow one or more of the characters – there are about a dozen, including a bride, a nurse, an actress, a raven and a black cat. They’re the troubled characters from Poe’s works. When they talk, they talk gibberish, but I was still drawn to them. I ended up frequently encountering the actress, portrayed by Megan Drury, and her stage craft and diversity were outstanding. I was also one of cruel nurse Ligeia’s “patients”. You see, A Midnight Visit is interactive as well as immersive.

You can pick up a book, read a letter, open a drawer, feel hair on a wall as you plunge into the world of the surreal. My finale had something in common with The Rocky Horror Show. I watched a short performance involving several of the characters that saw one of them wheeled out in a coffin. The closest thing to A Midnight Visit I have seen before was at the now defunct Owl and Cat Theatre in Richmond, where they presented Bordello in 2015. 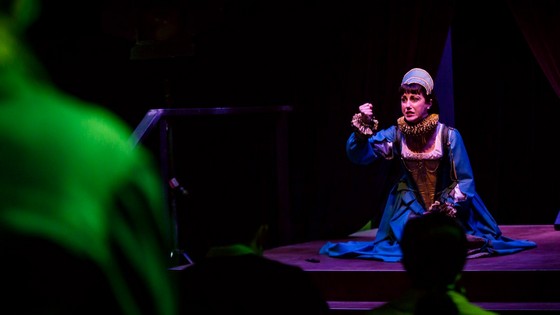 Creative producers and curators Danielle Harvey, who is also director, and Kirsten Siddle have done a fine job with A Midnight Visit. The sound design and composition is by video game makers Kpow. The sets have been developed by a team of designers, scenic artists, prop makers and master builders. Melanie Liertz is responsible for the spectacular costuming, which helps transport you to the eerie world of make believe.

I had heaps of fun with it all. So, why not take a trip to the wild side with some mates? A Midnight Visit is on at 222 Macaulay Road, North Melbourne until 3 October 2019.