Australian theatre doesn’t get much rawer and stirring than Barbara and The Camp Dogs now playing at The Belvoir. For 90 minutes we were entertained by an excellent all-girl pub band, we shared a road trip to the country’s top end, and we bemoaned the shameful degradation of the indigenous population. There’s so much talent in this production! The co-writers Ursula Yovich and Alana Valentine have created a down-to-Earth script and storyline that is depressingly real, but at the same time, has warmth and plenty of humour. 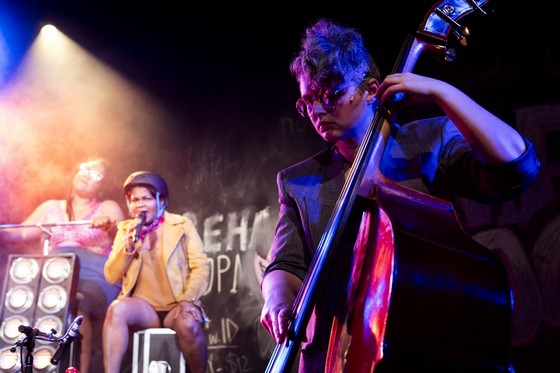 They also teamed with Adm Ventoura to write the songs (pity they’re not listed in the program). The music is varied, ranging from rock to slow ballads, performed by the gifted ‘Camp Dogs’ (Jessica Dunn on Bass Guitar, Sorcha Albuquerque on guitar and Michelle Vincent on drums).

What makes this play work so well is the fabulous imagery in the script and the cosy atmosphere of the set. Director Leticia Caceres and her creative team have replicated a funky suburban pub with casual sofas and patron chairs, tables and stools for the audience to embed with the actors. A raised stage for the ‘pub band’ makes sense and with the Belvoir’s tiered seating, the audience can’t help but feel relaxed and at one with the players. Full marks for first impressions and staging. Now on with the story…

Barbara (Ursula Yovich) is the lead singer of The Camp Dogs, named affectionately after the dogs that hang around camp fires in the Northern Territory. They do city gigs, but barely earn enough for a living. Her cousin Rene (Elaine Crombie) sings in a band at the Casino. They are more like sisters, having both been raised mostly by Rene’s mother Jill.

They have a feisty relationship. Barbara has a very colourful use of the language and can word paint excellent lewd descriptions. She doesn’t hold back on what she feels or thinks, choosing to shout first, think later. Rene is calmer and more sensible. Both however carry scars from their indigenous heritage, and they struggle to maintain a positive outlook. At one stage, Barbara laments “Even when I stand in a queue, I don’t get served anyway”, a reflection of the pervasive theme of dispossession in the play. Rene learns that her mother is in hospital in Darwin and convinces Barbara that they should go and visit her. They need money for airfares quickly, so they accept a gig on a fancy yacht. The yacht owner is Indian and boasts about the 150 languages on the sub-continent. A funny scene ensues as Rene proudly starts to recite the 250 languages in Aboriginal culture. Touché!

Arriving in Darwin, they find that Jill has left hospital and gone back to Katherine. Travelling on a motorbike with sidecar, there are some very amusing scenes and banter between Barbara and Rene. Somewhere in the outback, Rene pleads “Don’t ask me to use my full brain in the full sun”. Finally with Jill, there are some sad, poignant moments. Barbara’s brother Joseph (Troy Jungaji Brady) is there as well, providing an opportunity for a family reconciliation. 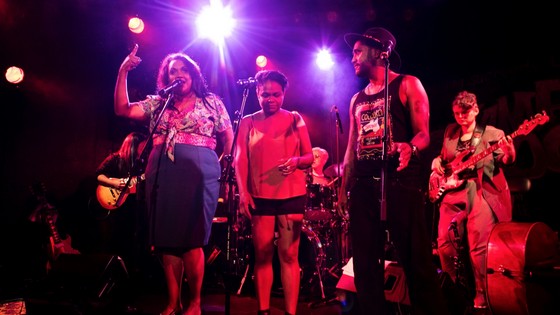 Throughout the performance are some great songs. The music was catchy, although the lyrics were somewhat unclear. Barbara made an interesting point about lyrics, commenting that as soon as you put an aboriginal word into the song, it gets classified as ‘World Music’. Another racial hurdle to cope with?

The whole production was terrific. The lead performers are not only gifted actors but have beautiful singing voices. Their perfection was equally matched by the band members. It was great to see an Aussie play dealing with burning cultural issues, fantastic music and the right sprinkling of self-deprecating humour. The standing ovation was well-deserved.