Kindertransport is an English play written in 1993, by Diane Samuels.

In early November 1938 an intensive series of ‘pogrom’ attacks on Jewish property and arrests of people were launched in Nazi Germany. This became known as ‘Kristallnacht’, The Night of Broken Glass, and has subsequently been called “pogromnacht’ or Novemberpogrome’. In the wake of this calculated violence the British government was lobbied by Jewish humanitarian and Quaker organisations to provide refuge. Ten thousand permits were made available for children of sixteen and under to enter and remain in the United Kingdom. So began, at the end of 1938, a series of train relief trips, the Kindertransport, from Germany, Austria and Czechoslovakia. These continued for almost a year until the Second World War began in early September, 1939. 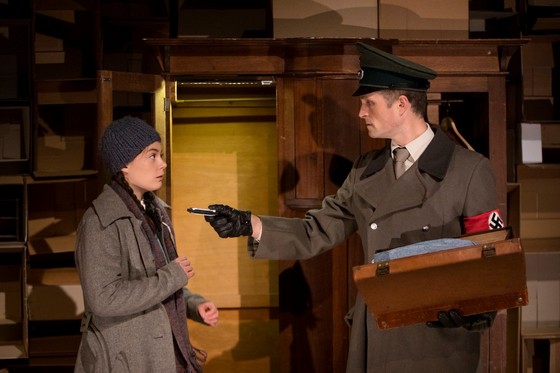 This play tells the story of a young Jewish German child, Eva (Sarah Greenwood), who is evacuated by her mother (Emma Palmer) to the city of Manchester and the home of Lil (Annie Byron), who cares, and after the end of the war, guides her into adulthood, as her parents are presumed dead. Much later after Eva has adopted an Englishness and new name Evelyn (Camilla Ah Kim) and nurtured a family of her own, her adult daughter, Faith (Harriet Gordon-Anderson), comes across memorabilia in an attic trunk that reveals a history of her mother that she has never known. In her entitled demand to have knowledge Faith aggressively forces Evelyn to reconnect to her childhood trauma, and the haunting of a childhood nightmare figure, the Ratcatcher (a figure we recognise as the Pied Piper of Hamelin), who captures children and removes them from their families, comes again to vivid and terrifying life.

The play is not based on a single story of history, but is a speculative fiction focused on investigating the psychological trauma that refugees may experience and the means that some may choose to find a way to survive, to be able to recover and thrive. The play presents the time-jumps of the storytelling in a non-linear way and is gentle, though surprising and enthralling in the emotional incidents it chooses to reveal on stage. It reveals the generational need to keep or expose secrets, and the clash of the rights of each generation to keep or expose those secrets. It connected me back to the intense and immersive experience of the bAKEHOUSE production earlier in the year of The Laden Table and its contemporary Jewish and Muslim family secrets and the contemporary, often clashing generational value placed on them.

The five women in this company: Camilla Ah Kin, Annie Byron, Harriet Gordon-Anderson, Sarah Greenwood and Emma Palmer give satisfying and accomplished performances. Ms Ah Kin is the best I have seen her and is intensely moving in her character’s struggle with the cleft stick of choice that confronts Evelyn. Whilst Ms Greenwood delicately and with gathering strength transforms the story of Eva from child to adult. Christopher Tomkinson plays all the ‘uniformed’ men of the play with aplomb. 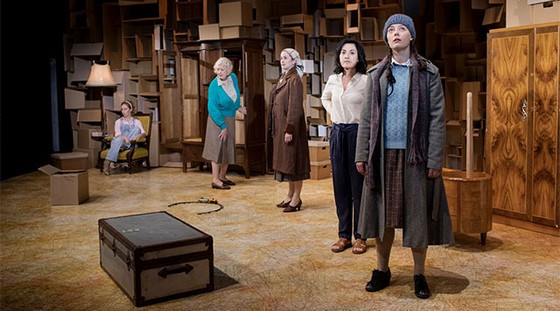 The set design by Imogen Ross of walls of boxes and versatile period furniture are enhanced by the lighting of Matt Cox and all aurally encased in the sure hands of Jed Silver, as the sound designer and composition.

Kindertransport is a warm and moving telling of the turmoil of the consequences of war on ordinary people – and their consequential lifetime of trauma. It has a relevance for our own times and the great tragedy of the world’s present refugees. The play and production by Sandra Eldridge tells a story that puts a personal face to the collective that we generally call, know as, ‘refugees’. Gently recommended.