If you’re after a slice of French sophistication coupled with sizzle, I have just the ticket for you. Crazy Horse Paris, which began in the City of Light in 1951, has come to town with the best acts from its legendary cabaret – eight before interval  and six after – in a show called Forever Crazy.

The stars are 10 women, classically trained dancers. They tend to wear very little. Often they wear just the tiniest of G-strings; at times some skimpy “costumes”. They mesmerise the audience, through the best part of a couple of hours (including a 20-minute interval). They’re accompanied by some pretty wicked music and lighting, which give the production extra bite. The songs are a combination of popular tunes from the likes of Britney Spears and hard, raucous beats. Two large screens, on either side of the stage, bring the action up-close and personal.

The ladies are joined by one double-jointed male, with a great sense of comic timing. He contorts in a way the body shouldn’t. He appears twice, the second time involving audience participation. 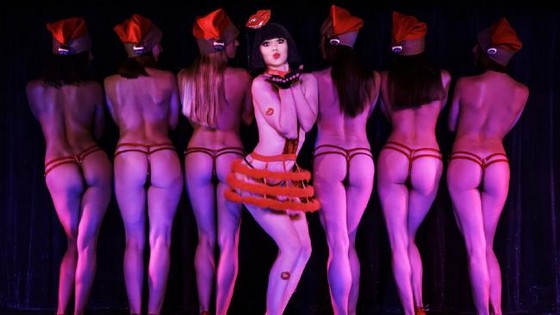 The show starts with the number that has opened every Crazy Horse Paris production since 1989, a tribute to the Queen’s Guard, titled “God Save Our Bareskin”; and the mood is set. There’s even an original creation inspired by the financial crisis of 2007/08. Forever Crazy was conceived as a tribute to Alain Bernardin, an avant-garde artist and founder of the original Crazy Horse. Fascinated by American “show girls” and the United States in general, he was driven by a single idea: to make artistic creation and women the focus of his cabaret. Over the years, Bernardin developed a highly recognisable artistic signature.

Each of his acts was conceived as a tableau, with its own storyline. There were dancers “dressed” primarily in lights, with original choreography, sets and projections; incorporating the latest musical and fashion trends. Since 1951, more than 800 “crazy girls” have performed in front of house.

There’s a lot to get excited about in this “best of” show. Bring on more French glamour I say. It is on at the Palms at Crown in Melbourne (until 2nd September) and then travels to the Crown Theatre in Perth (September 6 to 17), the State Theatre in Sydney (September 27 to October 1) and the Canberra Theatre (October 3 to 8). So, watch out for Crazy Horse Paris’s Forever Crazy, celebrating 65 years of naked couture.