“I really love the story and I can’t wait to see what they’ve done with it,” I overheard in the pre-show audience at Brisbane Arts Theatre’s take of the Australian cult classic Picnic at Hanging Rock. It’s hardly a surprising expectation; the story of the disappearance of three boarding schoolgirls and a teacher during a picnic at the natural attraction of Hanging Rock in 1900 has been part of the Australian psyche for over a century, engendering the kind of folklore usually reserved for stories that have basis in truth.

Although its original source material, Joan Lindsay’s 1967 novel, is a cornerstone of Australian literature, it is Peter Weir’s popular and acclaimed 1975 movie that has maintained the haunting story of Picnic at Hanging Rock as a purportedly-true tale rather than manufactured myth. And as Brisbane Arts Theatre’s production of the classic opens to a smoky stage, it appears that capture of this integral atmosphere is to be central to the retelling. Unfortunately, is not consistently the case. 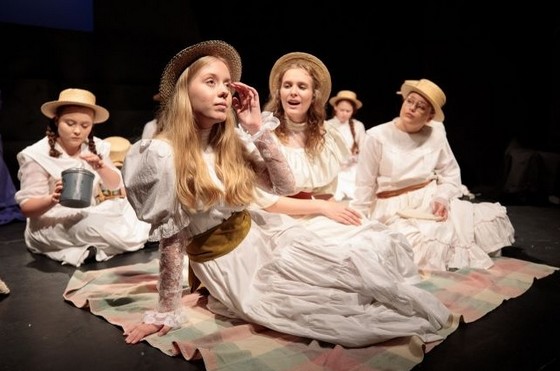 Within half an hour, the girls have disappeared on adventure to investigate the geological marvel, leaving the rest of the show left to reconstructing events and presenting the aftermath from a variety of perspectives. Act One paces along well, however, things drag in Act Two as some scenes stall in crawl towards conclusion of its ultimate 180-minute duration, such as when ocker Albert’s (Williem Whitfield) cumbersome sometimes under-enunciated dialogues tumbles into itself.

In the absence of a dreamy or eerie aesthetic, the burden of developing the supernatural terror of the story falls significantly upon its dialogue and so there are a lot of scenes, in Act Two particularly, and although the production does well to make these as seamless as possible in transition by smoothly beginning some dialogue in their final construction and in-turn lighting scened segments of the stage as required, the number of transitions does affect pacing.

As its various incantations have shown, the story has all the ingredients of an engrossing mystery, however, these are not always fully exploited. The terror of the landscape is hinted at in the staging through appearance of the angular outline of the Victorian hinterland’s volcanic rock, however, the under-cooked gothic themes seem like a missed opportunity to have the soundscape play more of a role. Although there is more evocation of mood in Act Two, still, the only real suspense comes as the audience waits to see if the final scene is indeed the end and if the cast will be appearing for a curtain call.

It is a shame that the actors are not given this opportunity to receive applause, as the play includes many noteworthy performances. Sandra Harman is solid as the stern headmistress Mrs Appleyard, and although some accents appear a little mixed, in contrast, Emma-Kate Reynolds gives an enticing performance as the romantic young French Governess Mademoiselle Dianne De Poitiers. Aoife Kissane is poised as the College’s wealthy prized recruit Irma Leopold and Rachael McFarland is appropriately annoying as the ungainly know-it-all younger schoolgirl Edith. And Reagan Warner, appearing in support roles, again shows that he is one to watch. These performers do well to engage the audience in the lengthy show, however, with overt foreshadowing and now-troublesome pre-feminist statements that evoke unnecessary audience reaction slowing things down, they have work to do to keep it pacey. 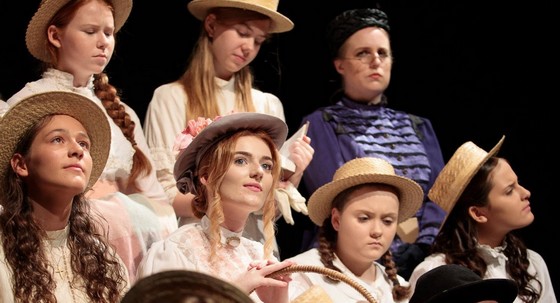 It’s not that this Picnic at Hanging Rock is bad, as many components are very good; it is more that it could easily have been better with increased attention to detail. Costuming is impressively authentic (though it seems it would not be an Arts Theatre production without appearance of at least one dire wig). And clever staging allows, for example, the cart ride to the picnic to be recreated to good effect, however, the turn-of-last-century sensibility is sometimes spoiled by careless oversights like a prop with visible barcode.

It’s rare that a fictional story is so widely regarded as fact, so any exploration of Picnic at Hanging Rock is going to be compelling. In Brisbane Arts Theatre’s hands, the tale is still as fascinating as ever, even if it could be told with more meticulousness.