Next to Normal begins with a familiar modern family scene; suburban mother Diana Goodman (Carly Skelton) waits up late for her son Gabe (Christopher Batkin) and attempts to comfort her academically-anxious daughter, Natalie (Hannah Kassulke). Soon husband Dan (Adam Bartlett) rises to help prepare the family for “Just Another Day”. Yet their lives are anything but normal; bipolar mother Diana is at the edge of a serious relapse and her long-neglected daughter is rebelling in reaction. 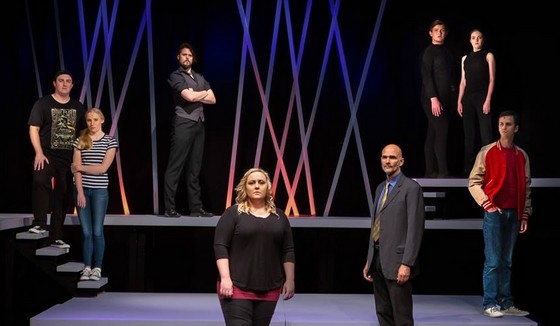 Having seen the show previously, I knew that this was not going to be your standard fell-good musical, not just because of its complex and confronting themes, but its provocative lyrics and thrilling rock score. From overheard pre-show foyer conversations, it seems I may have been in the minority, meaning that while I was looking for repeat-viewing clues in its craftedness, others are able to experience its twists to full effect as Act One paces along with barely time to applaud after musical numbers.

A critical and commercial success such as Next to Normal (it won the Pulitzer Prize for Drama, but missed out on the 2009 Tony Award for Best Musical to Billy Elliot) is an ambitious choice for an independent theatre company, however, it is a risk that, in this case, brings great reward, largely thanks to the convincing performances of all cast members. Coming off the back of her 2018 Matilda Awards receipt of the Bille Brown Award for Best Emerging Artist, Skelton is compelling as grieving mother Diana, distanced from her dysfunctional family. Her nuanced performance comes as much from her facial expressions and body language, as her words. Indeed, it is one of power but also vulnerability and immense sadness. Her voice goes from soft and sweet to strong and forceful, with particular highlights including “You Don’t Know” and “Didn’t I See This Movie”, when she reacts angrily to suggestion of electro-convulsive therapy by comparing the treatment to the lobotomies performed in One Flew Over the Cuckoo’s Nest.

Bartlett is also excellent as the husband devoted to getting Diana better, even if he doesn’t know how, settling into the character in Act Two as he attempts to guide a post-treatment Diana back to the good times they had and maybe more. And when the two first sing together, it serves as evidence of this being one of the best Brisbane Arts Theatre shows I have ever seen. The show’s Tony Award winning rock-infused score is full of rhythm and energetic angst, brought to brilliant life by the show’s band (musical director Julie Whiting) and while the punchy anthem, “I’m Alive”, seems underdone in its power, this can almost be forgiven by the final, hopeful ensemble number, “Light”.

While there are some sound muffles and missed microphone cues, Daniel Benefield’s lighting is excellent in every instance, appropriate for a show in which light occupies place as such a significant metaphor. It effectively evokes both a warming nostalgia to Diana’s “I Miss the Mountains” worry that her best years may be behind her and brings to vivid life her perceptions of her crazy rock-star therapist (Isaac Tibbs). Narratively, it also supports transition from Diana’s hallucinations to return home from hospital to the stark reality a life she no longer remembers, working well in conjunction with Kiel Gailer’s simple but effective set design. 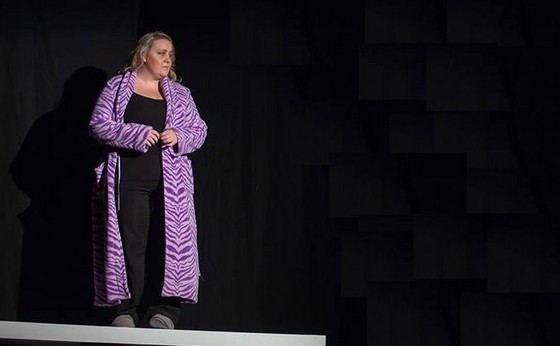 As a sung-through musical with only scattered lines, Next to Normal is a certainly a challenging production choice. Brisbane Arts Theatre has not only accepted the task but embraced its every emotional opportunity. Act Two, in particular, both captures your heart and wrings it out, even if it drags a little after the momentum of Act One, perhaps due to the show’s 8pm start time. Still there is no denying how profoundly moving this intelligent piece of theatre is in its capture of the conflicting emotions of complex issues. Under David Harrison’s mature direction, the show does not shy away from its confronting content, but is sensitive it its portrayal and despite the darkness of the story, its finale is alive and alight with hope. Still, the show comes with a content warning about is scenes surrounding issues of self-harm, grief and mental illness. If you do find anything within the show triggering, there is a list of services you can reach out to include in the program.

Next to Normal is showing at Brisbane Arts Theatre from 23 February – 23 March 2019.