We Will Rock You is an ambitious show, especially for an independent theatre company. Yet, despite the accordingly variable talent levels on stage, Brisbane Arts Theatre’s production serves as a treat for classic-rock fans. 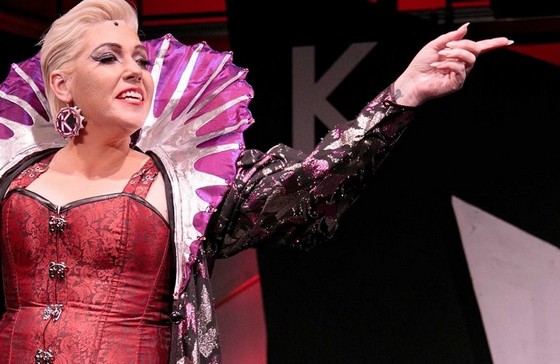 The Orwellian rock musical, which is filled with about two dozen Queen songs, takes place 300 years into the future of earth, now named the iPlanet, controlled by Globalsoft leader Killer Queen (a fabulous Natalie Mead), where everyone dresses, thinks and acts the same, rock is unheard of and all musical instruments have been banned. Enter hero Galileo Figaro (William Toft), who just wants to break free and, after dreaming of a world with rock music, sprouts the lyrics of past songs without knowing their meaning or origin, including the first few lines of Bohemian Rhapsody (a device which adds much humour to Ben Elton’s tongue-in-cheek script, before becoming overdone).

When the rebel is captured by the Killer Queen and her chief crony, Police Commander Kashoggi (Liam McDonnell) he meets the sassy, smart-mouthed Scaramouche (Katie Rouston), another rebel thinker who won’t conform to Globalsoft’s ways so is mocked by her peers for just wanting somebody to love. After escaping, they team up with a rebel gang of Bohemians, including Brit (Mackenzie Kelly) and Oz (Row Blackshaw), who are searching for items they think will make a musical instrument.

It is a narrative of convenience to allow for inclusion of feature of some of Queen’s all time biggest hits because, as a jukebox musical, We Will Rock You is all about the music and while some members of the ensemble project a lacklustre lack of energy, there are a number of strengths from the lead performers.  William Toft brings an impressive vocal range to Gallileo’s songbook, rocking with bombastic sounds to the famous one-two-three beat of We Will Rock You, but also offering a soft, soulful touch in uplifting duet with Scaramouche, You’re My Best Friend. Row Blackshaw, too, is vocally very strong as Oz, but nobody else has the commanding stage presence of Killer Queen Natalie Mead, and not just due to her amazing costume pieces (costume design by Erin Tribble and Frankee Walker). She simply ignites the lyrics of the band’s first international hit, Killer Queen with soaring vocals.

Liam McDonnell gives his dialogue an appealing Riff-Raff-like sinister slink, but is underused in duet with Mead of the funky Another One Bites the Dust.  Mark Tuohy’s appearance as Buddy Holly, leader of the archeologically-clueless bohemians, whose literal interpretations muddle the mythology of the analogue past’s cherished artefacts, appears all too short. His wistfully reflective delivery of These Are the Days equips the ballad with much melancholy, making the audience want to hear more of his smooth vocals. 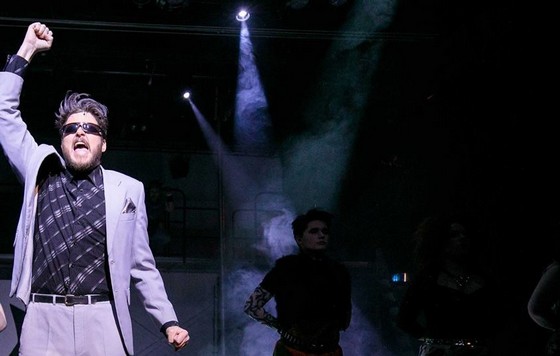 We Will Rock You requires a big musical sound and in this regard the show generally delivers, although some sound issues affect the fluency of transitions. There are lighting lapses too, like missed spotlights and combining stage lighting with shine-out to audience during moments of musical emphasis which seems a little amateurish.

We Will Rock You has always been an audience favourite, since it opened in London’s West End in 2002 without critical acclaim. It’s certainly contrived and overlong, but still an enjoyable night out in either reminiscence of or introduction to the many beautifully crafted and unapologetically bombastic songs of the iconic four-piece hard rock band, even if the show has moved its setting to the USA and, accordingly, worship of Elvis rather than Queen lead singer and flamboyant showman Freddie Mercury as messiah. Indeed, as audience members clap, swap and sing along, it is clear that Queen’s kind of magic still reigns for many.