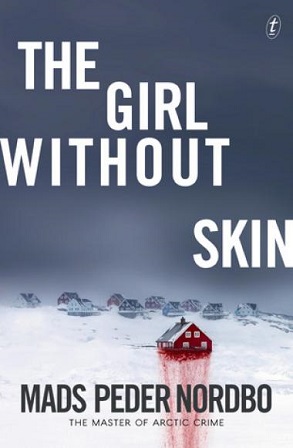 Opening with a breathtaking first-person account of the car accident that killed journalist Matthew Cave’s wife and unborn daughter, The Girl Without Skin isn’t as straightforward an undertaking for fans of Nordic Noir as it might seem.

Early on in the novel you’re going to find yourself ticking off the required elements list. Awful personal tragedy; man lost in grief and lacking direction; isolation in a cold and inhospitable location; tension between different groups of people; local indigenous stories and customs; bone-chilling cold and weather creating a closed room setting; an outsider finding his way in a strange location; and since the advent of The Girl With the Dragon Tattoo, a loner, slightly weird, off-sider who is more of an outsider than the outsider who is the central cornerstone of this story.

In this case – Matthew Cave serves as the sufferer of the personal tragedy; the grief-stricken outsider in a strange place – a journalist from Denmark who finds himself in Greenland initially writing a story about the discovery of a mummified Norseman pushed up from a glacier, which rapidly turns into a current day murder. Which then reaches back into recent history and a series of cold-case murders that were never solved. The role of loner has been allocated to Greenlandic woman Tupaarnaq, recently released from jail for the murder of her entire family (except her brother), she’s tough, stand-offish, less of an off-sider and more of the central protagonist at points through the story. She’s the source of the title of the novel as well – covered in tattoos, she’s seemingly without skin. Add to that a town that’s isolated, a current day murder that’s occurred on the ice shelf outside town, cold, snowy, inclement weather, the implications of the manner in which the killings happened, and the tension between the local Greenlandic people and the Danes and you have your list of required elements. Add to that the enigma of the character of Tupaarnaq, the complications of Cave’s own father, and there is potential for some readers to get the distinct feeling we’ve been here before.

In many ways, dedicated readers of Nordic (Scandi) noir have been here before. There are many elements that seem to echo the Dragon Tattoo series in particular closely, and this novel is digging its way into societal problems, and the sorts of dark, deep secrets within families that make your stomach churn and your teeth grind. Although The Girl Without Skin is less of the why than we’ve come to expect from many of the analytical psychological thriller versions around.

Which is making it sound like The Girl Without Skin is a bit of the same-old-same-old. Which for the first third of the novel it was starting to feel like the case, until at some point it became hard to step away from. There was much to learn here about the cultural tensions and differences between Danes and the local Greenlanders. There is much intrigue about where Tupaarnaq and Cave are heading, and how they will both adjust to lives that have dished up a lot of hard blows. It was interesting to see that the domestic and authority blindness that lead to abuse of children and violence within families happens in all sorts of places and cultures, and it was good to know that there are some good people in all dark places.

Ultimately what The Girl Without Skin did deliver was potential for what’s likely to happen next. Just because it’s got a list of required elements doesn’t mean they weren’t delivered well, making this an extremely readable and intriguing book.