Although it has some delightful elements, Last Christmas is an uneven mix of silliness and fun. 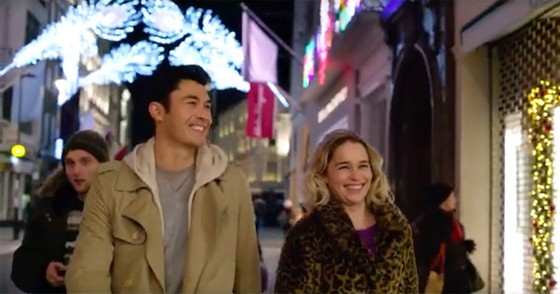 Kate (Emilia Clarke) hasn’t exactly got her life together. She’s personable, but far from stable. She doesn’t see eye to eye with her overbearing mother, Petra (Emma Thompson), an immigrant from the former Yugoslavia. Nor is she disciplined enough for her gay older sister Marta (Lydia Leonard). Good decision-making isn’t exactly Kate’s strong suit. She works as an elf (complete with appropriate costume) in a year-round Christmas shop owned by an Asian woman she calls Santa (Michelle Yeoh), but Kate is quite flighty. Her choice of male companion hasn’t exactly worked out either.

Then Tom (Henry Golding) steps into her life and makes quite an impact. A good Samaritan, Kate is won over, but even though he appears to like her, she struggles to see him regularly and consistently.

Set in London during the 2017 festive season, Last Christmas features the music of George Michael and Wham!, including the holiday classic of the film’s title. In fact, the concept behind the movie dates back a decade when producer David Livingstone started development of a rom-com based on the song. It originated with his obsession with the Jimmy Stewart staple It’s a Wonderful Life. Livingstone waned to create something that had that everlasting charm and was a Christmas comedy. Let’s just say this isn’t It’s A Wonderful Life. Emma Thompson and Bryony Kimmings wrote the screenplay and Paul Feig (Bridesmaids) directs.

Emilia Clarke is wonderful in the lead role, embracing the fraught and kooky character she plays. So too Michelle Yeoh as her retail boss. Both have the necessary nuance to put a smile on your dial. Although Emma Thompson has arguably the best line in the script late in the piece – politically incorrect though it may be – I am afraid I struggled to accept her as an uptight Yugoslav. Nor was I sold on the performances of those playing her husband, Ivan (Boris Isaković) and other daughter (Lydia Leonard).

The dialogue is at times cringe-worthy and on occasions charming. I understand the difference may be regarded as a fine line, but it is a line crossed too frequently. I loved the twist that brought the screenplay to an end. I certainly didn’t pick it and it works well.

Last Christmas is first and foremost pitched as feel-good entertainment and while it has enough to carry the day, it lurches from below average to inspired.