Scientific subterfuge is at the centre of a gripping drama concerning the secret of life. We’re in London in the 1950s. Photograph 51 pivots around one of the greatest scientists of the 20th century, no nonsense English woman Rosalind Franklin (Nadine Garner), who lived from 1920 to 1958.

Franklin was a workaholic who was driven to succeed in all that she tackled. Failure was never an option for a female working in a male-dominated field. After being awarded a research fellowship to Kings College in London, things get off to a rocky start when her “boss” – Maurice Wilkins (Paul Goddard) – not only moves her into a new area of research but prevails upon her to assist him.

Indignant at the prospect of being anyone’s “assistant” and used to working alone, Franklin reluctantly agrees to partner Wilkins. His attempts to endear himself to Franklin fail miserably and the pair has an uneasy relationship from go to whoa. That is despite the best efforts of doctorate student Ray Gosling (Gig Clarke), who has been assigned to assist Franklin. Immediate before he worked directly for Wilkins.

She is far more taken by overtures from an American studying for his PhD, Don Caspar (Yalin Ozucelik), who is totally besotted by the revolutionary detailed X-rays Franklin is taking. Upon graduating, Caspar comes to work with Franklin.

Meanwhile, in Cambridge two other scientists are among others competing with Franklin for a breakthrough that could win them a Nobel Prize. They are former Wilkins’ colleague Francis Crick (Dan Spielman) and young eager beaver James Watson (Nicholas Denton). Despite some missteps the pair is shrewd, as Franklin continues to go about her business with diligence, seemingly unaware of the true feelings towards her of Caspar and Wilkins.

The title, Photograph 51, is drawn from the 51st photograph taken by Franklin and Gosling, which was the “Eureka moment”. It was the critical evidence in identifying the structure of DNA.

The play has been brilliantly written by American playwright Anna Ziegler. It premiered in London’s West End in September 2015, with Nicole Kidman’s performance as Franklin lauded and claiming several awards. Ziegler has crafted an intelligent, exacting and engaging, work. It draws us – the audience – into the professional and personal intrigue surrounding Franklin and the revolutionary project on which she is working. Ziegler cleverly introduces characters and their back stories gradually, starting with Franklin, Wilkins and Gosling. Then, when all six characters are known, she turns the screws. 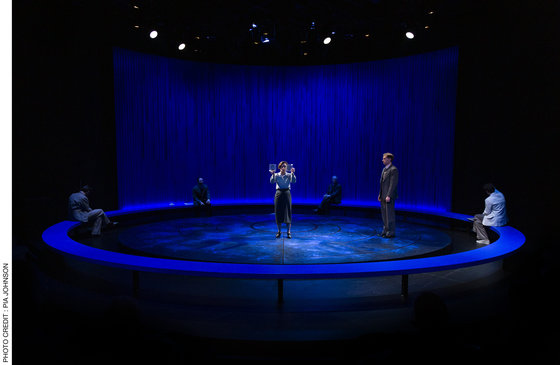 Nadine Garner is superb, bringing a sharp intensity to the pivotal role that informs the piece. Maurice Wilkins ensures Paul Goddard comes across as shy and awkward, unnerved by Franklin’s cold directness. Yalin Ozucelik is a standout as the enthusiastic and warmhearted Franklin acolyte.

Director Pamela Rabe keeps the action moving, with scenes positioned in and around a large blue circular ring that constitutes the stage. Photograph 51 grabbed my attention and held me tight throughout, building excitement about a discovery of global significance. It is playing at Fairfax Studio, at Arts Centre Melbourne, until 14th December, 2019.

I saw the first preview performance of the play.