The sumptuous big-screen soapie Crazy Rich Asians feels like a guilty pleasure. Based on the bestseller by Kevin Kwan, this is a contemporary rom-com that takes a fun look at what can happen when young love collides with old money. 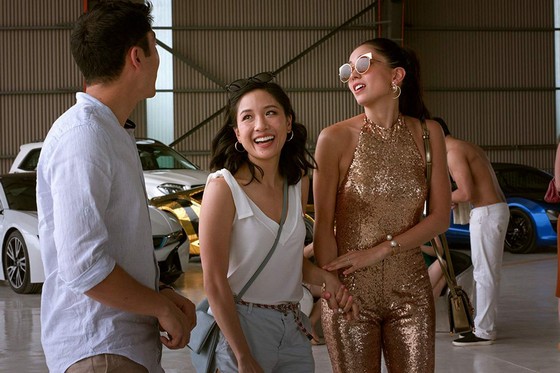 The story follows New York economics professor Rachel Chu (Constance Wu) as she accompanies her boyfriend Nick Young (Henry Golding) to his best friend’s wedding in Singapore. Excited about visiting Asia for the first time but nervous about meeting Nick’s family, Rachel discovers Nick has neglected to mention a few key details about his life. Not only is he the scion of one of the country’s wealthiest families, but also one of its most sought-after bachelors. Being on Nick’s arm puts a target on Rachel’s back. Jealous socialites and, worse, Nick’s own disapproving mother (Michelle Yeoh) take aim. She believes this modern American girl will never measure up. It quickly becomes clear the only thing crazier than love is family. But Rachel proves to be no pushover.

Directed by Jon M. Chu, the screenplay is by Peter Chiarelli and Adele Lim. Crazy Rich Asians features the first all-Asian ensemble in a Hollywood studio movie in nearly a quarter of a century (the last was The Joy Luck Club in 1993!).

Although set primarily in Singapore, the story mines humour from the idiosyncrasies of one family in a way that people everywhere can relate to. By the way, Singapore looks absolutely magnificent, so you may feel you just have to visit. The production values in the film are first rate. The production designer is Nelson Coates and director of photography Vanja Černjul. The look and feel of the picture is ostentatious, in keeping with the theme.

Chu and Young, as channelled by Wu and Golding, certainly make for an attractive and endearing couple. Around them though larger-than-life characters (like Wu’s over-the-top girlfriend) help make the picture what it is.

The pacing is spot on to keep you interested and entertained throughout. Nothing deep and meaningful here, Crazy Rich Asians is pure popcorn fare. But it’s a deluxe helping that’s so good you can’t possibly let a morsel go to waste.