The action-thriller Mile 22 follows an elite paramilitary team led by the methodical Jimmy Silva (Mark Wahlberg). Silva is direct all-business, incapable of separating himself from his work. His lieutenant is Lauren Cohan (Alice Kerr), and she’s almost as capable. But, unlike Silva, she must contend with distractions from the outside world. Foremost among them is being a divorced mother – often away – and having to navigate co-parenting with her combative ex-husband (played by director Peter Berg in a brief cameo). 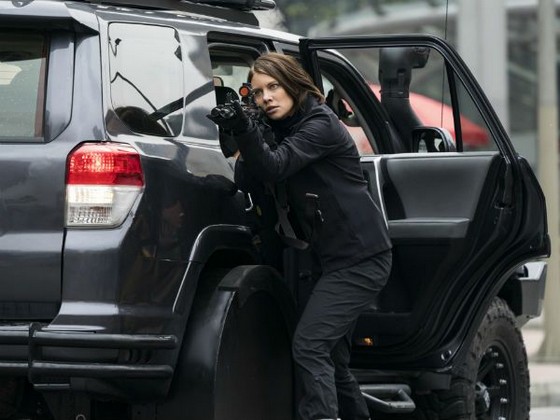 The other team members include Sam Snow (Ronda Rousey) and William Douglas III (Carlo Alban). They’re the CIA’s most highly prized secret operatives. Their urgent mission is to transport a foreign intelligence asset, Li Noor (Iko Uwais) from an American Embassy in Southeast Asia to an airfield for extraction – a distance of 22 miles.

Noor, an officer with the local Special Forces, possesses highly classified information, which could avert major terrorist attacks. The CIA team must race against time and run the gauntlet in enemy territory as the city’s military, police and street gangs close in, determined to reclaim the asset.

While Silva and team risk life and limb, they’re aided from thousands of miles away by a tactical command group led by a man known only as Bishop (John Malkovich). The high-tech team wields keystrokes, hacking skills and intercepted information as easily as any physical weapon.

22 Mile marks the fourth collaboration between Berg and Wahlberg; the others being Patriots Day, Deepwater Horizon and Lone Survivor. Lea Carpenter provides the screenplay, from a story by Graham Roland and Carpenter.

Wahlberg’s flawed hero dominates this intense, convoluted and ultra-violent film. Mind you, his take-no-prisoners attitude is one thing, but his obsessive flicking of a rubber band on his wrist wore thin early on.

Once we got into the body of the plot, I was reminded of the Bruce Willis actioner 16 Blocks. It’s one of those movies where the tension doesn’t let up; and plenty of casualties pile up along the way.

Wahlberg is his usual safe pair of hands, even if the plot isn’t always easy to follow. The bad guys just keep on coming. Iko Uwais as the asset presents as a lethal poker-faced Zen master. But the vulnerability as well as the strength Alice Kerr brings to Cohan distinguish her.

The ending is a set-up for a sequel. I can’t say I was totally sold on Mile 22 because it was too confusing for its own good.