Helmed by Ron Howard, Solo: A Star Wars Story combines double-crosses, action, humour and romance. This is the second break-out film in the Star Wars universe, the first being 2016’s Rogue One. 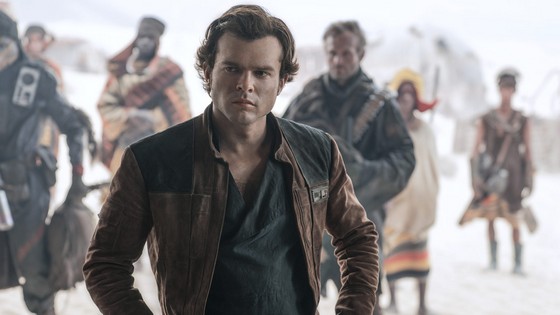 Solo is the story of unpredictable – at time reckless – adventure-hound, scoundrel and maverick Han Solo. It follows his daring escapades within a dangerous criminal underworld. It’s a rite-of-passage tale, exploring Solo’s formative years, charting his journey through a series of encounters with shady types.

Solo includes elements of trust, loyalty, love and betrayal. There’s also ample humour as the key characters take plenty of digs at one another. And what would a Star Wars movie be without fighting?

This one has been written by father-and-son team Lawrence Kasdan and Jonathan Kasdan. The elder Kasdan has been responsible for the screenplays for three other Star Wars’ films, dating back to 1980’s Episode V: The Empire Strikes Back and most recently 2015’s The Force Awakens.

Harrison Ford’s are big shoes to fill, but with his boyish grin it is clear that Alden Ehrenreich set out to have some fun as a young Han Solo. And his character certainly has fun. He lives the dream of becoming the best pilot he can be. Wookiee Chewbacca (Joonas Suotamo) has far more screen time than in any other Star Wars movie. He’s so integral to the plot, saving the day more than once.

Emilia Clarke brings the perfect amount of charm and sass, to the role of Qi’ra, with whom Han is besotted. (The pair was boyfriend and girlfriend on the planet Corellia before they narrowly escaped – though not together – with their lives.)

Woody Harrelson is the mercenary Tobias Beckett. Beckett lives by the rule of thumb “don’t trust anyone” … and given what goes down, you can hear more than a little wisdom in those words.

Solo is set in the days before the Rebel Alliance’s struggle against the Galactic Empire. Fans will of course be aware that Han became a chief figure in the Alliance. It provides a plausible and entertaining back story that should be enough to please most Star Wars fans.