Woody Harrelson stars in the title role as Wilson, a lonely, eccentric misanthrope who reunites with his long estranged wife Pippi (Laura Dern). He gets a shot at happiness when he learns he has a teenage daughter, Claire (Isabella Amara), he’s never met. 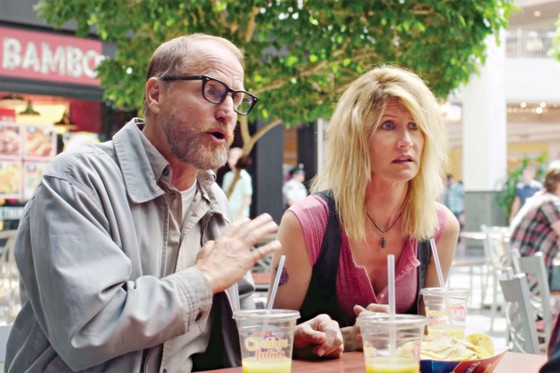 The script has been written by Daniel Clowes, based upon his graphic novel of the same name. He was inspired to imagine Wilson’s journey by an experience he shares with the character. “My dad was in the hospital, just as Wilson’s is at the beginning of the movie. I was sitting by his bedside and contemplating the void and I just wanted to be in that room with him. I brought my little sketchpad and started doodling light and funny little comic strips, to keep myself from getting overwhelmed.” Eventually a character began to emerge, at first no more than a stick figure, but with the over-sized personality of a man who speaks the absolute truth, whether anyone wants to hear it or not.

The movie expands the events of the book beyond its single-page graphic novel style vignettes, developing the personalities further and filling in some of the blanks. Direction comes from Craig Johnson (The Skeleton Twins).

Wilson is what I would describe as a “try too hard” picture that lacks consistency. It appeared exaggerated to try to elicit audience response. Further, it looked to twist and turn us from feeling uncomfortable and bewildered to sympathetic and empathetic, using every device from whimsy and romance, to violence and inappropriate behaviour. It may have looked good on paper and although parts of what were delivered worked, other components didn’t.

Wilson is this decidedly weird guy. I would say that he is not quite there. He has some mental health issues. Woody Harrelson, who is a mighty fine actor, does a good job of inhabiting his strange character’s mind. Laura Dern, though, I found far less convincing as his ex-wife whose back story simply doesn’t appear credible. In other words, I didn’t believe who she purported to be.

I dare say some will appreciate the material a whole lot more than I did because they will excuse the unevenness simply to watch Harrelson play unhinged. I though, am not so forgiving and I was pleased when it ended. Rated MA, Wilson scores a 6 out of 10.