Dream$ong may not be Hillsong, but this sure feels like a parody of that church, founded in Sydney’s western suburbs in 1983. Everything is exaggerated for the sake of comic appeal … and it works.

The pastor, Richard Sunday (Nelson Gardner), is a slime ball who saw his first wife off in a catastrophic sky diving accident 11 years ago. They had a God-fearing daughter April (Nicola Bowman). The pastor is now married a second time to Whitney (Annie Aitken), Australia’s number one Christian pop artist. In reality, the Minister is far more interested in relationships on the side with both sexes. He’s always used the guise of the church to further his own ends in more ways than one.

Then, suddenly, comes the shocking news that Dream$ong is in deep financial distress. That’s when Pastor Sunday cooks up the hairbrained scheme of resurrecting Jesus. The man of the book holds rehearsals for the new Jesus and that is when Chris Thompson (Maxwell Simon), soon to be known as ChrisT, comes to the fore.

More than that, though, the Pastor ties his campaign to raise much-needed funds to the re-election of a most unpopular Prime Minister, Darren Cunningham (Jarrod Griffiths). Of course, nothing goes to plan. And surprise, surprise, another person – purporting to be Jesus in feminine form (Olivia Charalambous) – reveals herself to a deeply tormented April. It is then that April realises that her father has been a phony all these years.

Hey, the word “zany” doesn’t do the plot justice. It is certainly out there, taking the proverbial out of the shenanigans you hear some churches and their followers get up to. The bottom line always seems to be the same – revenue raising and self aggrandisement.

There are some priceless one liners in Dream$ong, with book and lyrics by Hugo Chiarella. This is not a musical for the true believers or the feint hearted, but for the rest of us it is fun-filled and off the wall. Some of the voice talent and stage presence is stronger than others. It has an amateur feel about it.

Gardner, complete with Snidely Whiplash moustache (those old enough to recall the animated television series The Rocky and Bullwinkle Show will understand that reference), revels in the lead. Aitken, too, makes her presence felt as her character is less than impressed by her husband’s empty promises. Simon is a real scene stealer as ChrisT starts to believe his own hype. 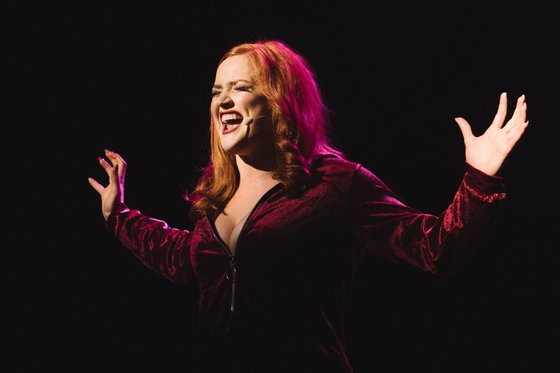 The energetic 11-strong cast is constantly on the move, both on stage and mixing with the audience, giving voice to Robert Tripolino’s largely up-tempo music. A four-piece band appears up a level on either side of the stage. I loved the simple but effective staging. All the action revolves around a large cross centre stage, onto which is projected a veritable cornucopia of evocative imagery and wording.

Directed by Lauren McKenna, with musical direction from Maverick Newman and choreography by Madison Lee, Dream$ong strikes a chord and tickles the funny bone. Two hours plus interval, it is playing at Alex Theatre in St Kilda until 30th November, 2019.