Some of the most intoxicating circus acts I have had the good fortune to see are among the highlights of Santa’s Magical Kingdom, which has reappeared in Melbourne in the lead up to the festive season for an eighth time. The word “wow” doesn’t do them justice – they are that good.

The experience is divided into two, with indoor and outdoor rides (including my favourite, a giant eight lane mega-slide), Santa meet and greets, gingerbread man decorating (and eating) and faux snow making machines getting littlies very excited. The atmosphere is fun-filled – vibrant, full of life and colour. Then, there’s the big top show for about 40 minutes, which has kids and kids at heart reaching for superlatives.

After a couple of smartly attired elves give more than a dozen hula hoops at a time the swivel hip treatment, we are introduced to members of a third and fourth generation circus family. Super fit and super strong Moroccan Mohammed, who doesn’t look anywhere near his 48 years of age, is accompanied by his 15 and eight-year-old daughters. The resultant hand stands and mesmerising balancing act showcases power, skills and dexterity the likes of which must be seen to be believed. The pièce de résistanceinvolves a bow and arrow wielded by the elder child, activated by one foot and aimed at a lilac-coloured polka-dotted balloon on a board, as she is held upside down by her father. A-M-A-Z-I-N-G!

Flexibility and fearlessness are the cornerstones of the next act – a woman cavorting on a single ring dangling precariously high in the air.

A hilarious and super talented 55-year-old Frenchman follows, cracking jokes as he circles the stage on a bike, which literally comes apart. It might not sound like much, but hands down it is one of the best things I have seen in the name of entertainment. He rides the bike with one leg, creating kangaroo hops, from the handlebars and backwards – even turning it into a unicycle. 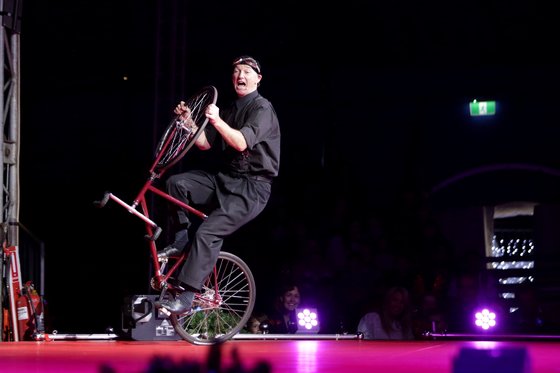 He “repairs” said mode of transport incorrectly (including the chain pointing upwards rather than downwards) and still manages to pedal – precision and balance personified. But that is not all. His routine also involves astounding command of a tiny bike and later a teeny-weeny one while riding through a semi-circle of fire. All of it is eye-catching and sensational, with delightful humour that adults can appreciate.

The show wraps up with a dare devil foursome taking their motorbikes inside the Globe of Death – a lattice-like steel ball – at high speed. Given its high risk, your heart is figuratively in your mouth throughout as one, two, three and then four are caged and mobile at the same time. That brings to an end a truly spectacular show, an integral part of Santa’s Magical Kingdom, which is on at Caulfield Racecourse until 29th December, 2019.