The Christmas Spectacular is the work of Silvers Circus. This top-notch circus show was my highlight of Santa’s Magical Kingdom, a colourful cavalcade of rides, games and interactive experiences, most inside the Big Top at Caulfield Racecourse. But the extraordinary prowess of the circus performers who feature in this production left my mouth agape.

The emcee is, of course, the jolly fat man, who arrives in a sleigh with his elves by his side. The Snow Queen provides no shortage of high trapeze highlights, before a truly extraordinary performance from a youngster who is tossed and twirled in the air via the feet of his upturned companion. For all the world, he becomes a rag doll and yet emerges with a broad grin. 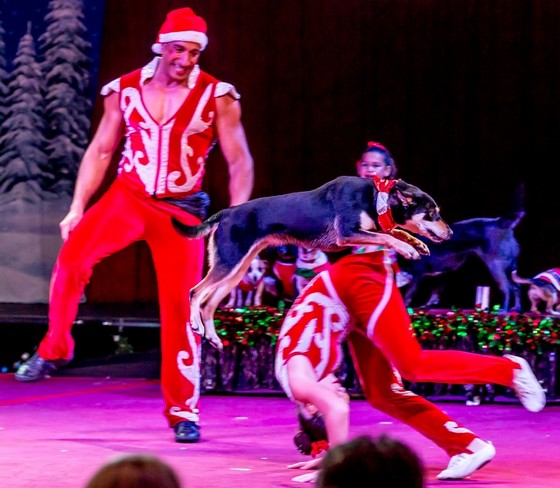 Unicycles of all shapes and sizes make an appearance, not only under foot but even balanced on one’s head, with the artist concerned at one point juggling four rings at the same time. Suddenly there is a surfeit of tail wagging as 10 highly trained dogs enter the arena and under the watchful eyes of their ring leader perform a series of remarkable stunts. Leaps and bounds, around cones and through hoops, balancing on large plastic balls, climbing in and out of cylinders, even a see-saw routine is part of their repertoire.

And then the pièce de résistance, the “globe of death”, in which as many as four riders loop vertically and horizontally at speed around a circular mesh cage. It is marvelous, hair-raising stuff. I can only imagine the countless hours of training and the precision riding that must take.

Mind you, the same goes for all the other flawless acts. This is breathtaking circus at its finest. The Christmas Spectacular is at Santa’s Magical Kingdom at Caulfield Racecourse, until 23 December 2018. I spent three hours there and the time sailed by.