Creativity abounds in The Drill, which is unlike anything I have seen – a combination of circus arts and interactive experiences. 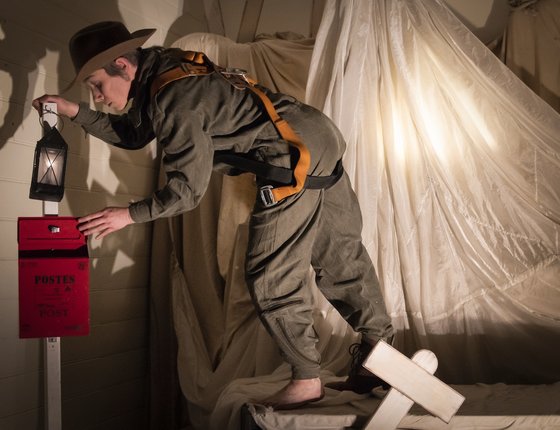 We’re in the midst of WWI and campaigners for peace are adamant they want politicians to listen to their pleas. A rally is planned and a petition for an end to the war is accumulating signatures. At a gathering involving performers – dressed appropriately in drab green, grey, mustard and brown – and patrons there is an atmosphere of hope and positivity. We are encouraged to join the movement and to leave our mark by writing a few words about peace onto a small paper tag, which will join many others strung up. There is dancing to classical music and laughter as spirits are high.

Those attending are broken into small groups and exposed to a series of acts and interactions with some of the 26 artistes. At my first post, I witness acrobatics on two stationary poles and an aerial swing, coupled with a little juggling. Then follows a delightful afternoon tea on pretty bone china, complete with freshly baked oatmeal cookies, as we are transported back in time, with much attention to period detail. A young woman sits knitting in the corner of the room. Our hostess – who is also knitting for the troops – receives a letter from her sister who is on a hospital ship in the waters off Gallipoli. This she pegs to one of many clothes lines above our heads, which are packed with similar missives from loved ones.

Our longest experience – lasting about half an hour – is one shared by all groups, although not at the same time. It is in the biggest space and involves a massive faux pair of knitting needles and a large ball of red wool unravelling (it has the appearance of netting) as the performers knit. Three small golden and white illuminated paper boats arrive and “ride the waves”. Then there’s a routine on four aerial swings, one of them carrying two performers, before an act involving cascading bright red material and white ropes. Throughout, the original music is tranquil. 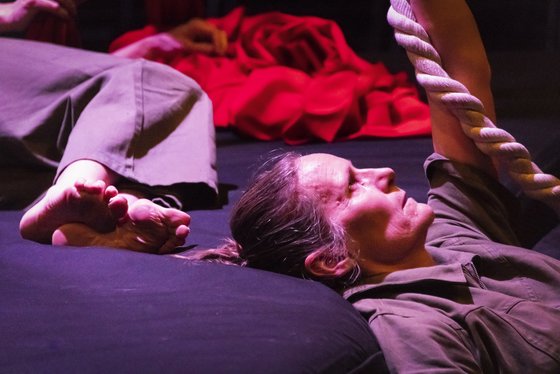 The experiences I am told we didn’t have in the allotted 70 minutes included being hospitalised with a war injury or illness and participating in wrapping care packages. There’s also a specific knitting post, an underground bunker, which points to the loneliness of war and a tiny space for a personalised parcel delivery with a difference. Clearly, I will just have to go back for another visit for this is, indeed, a glorious way to lose oneself in theatre of the mind and soul. At the helm are creative director Penelope Bartlau and circus director Katy Burrows.

The Drill is presented by Women’s Circus, as part of Due West Arts Festival, at The Drill Hall, 395 Barclay Street, West Footscray. It is on until 1st December, 2019.