Once upon a time, Luc Besson was the hottest director in French cinema. But the years and a couple of misfires (Valerian, anyone?) have seen him overtaken by the likes of Celine Sciamma and Olivier Assayas. Still, Besson gave us classics like The Big Blue, Subway and (my personal favourite) Leon: The Professional. Now he’s back in familiar surrounds with Anna.

Besson fans will recognise elements of La Femme Nikita (1990) here. While Besson has updated the ideas somewhat, his trademark stylistic elements remain. Besson is hardly noted for his restraint, and Anna is no no exception. He builds the film around two extended – and often gory – action sequences. Around them he weaves a complex tale of international intrigue. And while parts of it strain credibility, it’s never less than engaging. 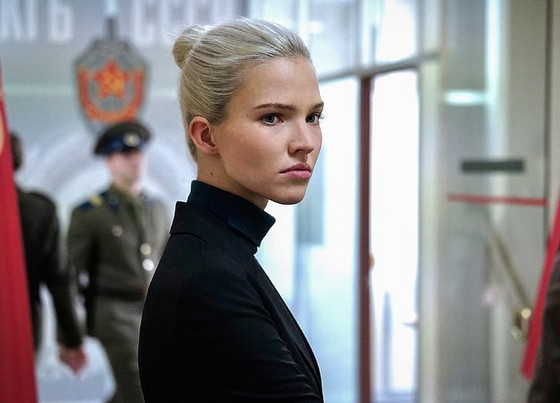 It’s the mid-1980s. In Moscow, Anna Poliatova’s (Sasha Luss) life is going nowhere fast. Her boyfriend is a violent petty criminal and it looks like she might be headed for jail. But after submitting an application to join the Soviet Navy, she receives a timely visit from Alex Tchenkov (Luke Evans). He’s not from the Navy though – he’s KGB. Soon Anna is training to be a spy, and after a year, she’s ready for the field. Alex and his boss Olga (Helen Mirren) devise a plan to get Anna to the West unnoticed. They manipulate talent scout Samy (Jean-Baptiste Peuch) to take her on as a potential fashion model in Paris. Once in the French capital, Anna’s real – and deadly – work begins.

Besson is an instinctive storyteller. He revels in the broad strokes, not the fine details. His screenplay reflects that approach. The time lines are sometimes confusing (if not directly conflicting), the historical details are sometimes wrong and the action is often unrealistic. But none of that matters. Anna is all about look and feel, not precision.

And the look is impressive. Besson makes excellent use of locations in Paris, Moscow and Milan. He stages the centrepiece action sequences with panache. The script feels a little padded – not unusual for Besson. However I had some reservations about Besson’s approach to the character of Anna. Certainly, the male gaze seems to be in play here. However, he just about pulls it back at the end. The final showdown is all about women taking charge of their own lives rather than being manipulated by men.

Model-turned-actor Sasha Luss brings a cool elegance to Anna, a spy-turned-model. While the role doesn’t call for a lot of emoting, Luss gives a solid performance, notably in the action scenes. Helen Mirren (Winchester) sports outrageous glasses and an even more outrageous accent as Olga, but nonetheless delivers strongly. Luke Evans (Midway) is suitably gruff as Alex; providing a counterpoint to Cillian Murphy (Dunkirk) as Lenny Miller, Alex’s smoothly charming opposite in the CIA.

The idea of a beautiful woman as a ruthless spy is hardly new. But while Anna isn’t groundbreaking, it’s a solid Cold War thriller filled with the kind of spy-movie tropes we’ve come to expect. Besson provides a glossy, enthralling movie viewers can enjoy without thinking too hard.