Midway is a gripping, visually spectacular – if, at times, melodramatic – recreation of events leading up to the pivotal Battle of Midway that turned the tide against the Japanese in World War II. The film, based on real-life events, tells the story of the leaders and soldiers who used their instincts, fortitude and bravery to overcome considerable odds. It’s about brotherhood, camaraderie, determination and sacrifice. 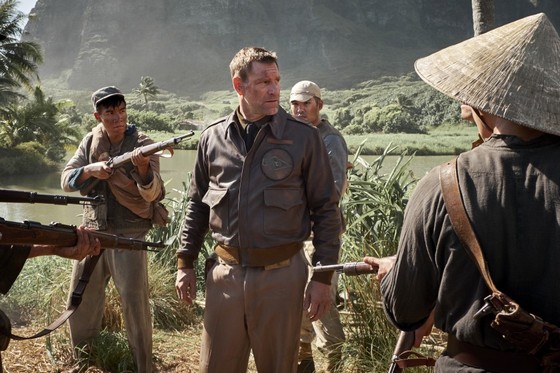 Having been decimated by the Japanese attack on Pearl Harbour only six months earlier, the U.S. Navy was desperately outmanned and outgunned heading into the Battle of Midway. The U.S. military held one great advantage: its intelligence operations and collective grit were strongly underestimated.

The film follows three story lines – a trio of interwoven perspectives on the battle.

Midway is arguably Roland Emmerich’s (Independence Day) finest film, bringing together multiple elements to take us to the heart of battle. Much credit must go to writer Wes Tooke, who has previously only written for TV series. There are heroic acts aplenty, with the fears and reservations of both sides laid bare. While the focus is mainly on the Americans … as mentioned, the Japanese leadership isn’t overlooked. Stoic representations of the key players are the cornerstone.

The square jawed Ed Skrein makes for a compelling centrepiece, around whom much of the action centres. So, too, the strategic rigour of Edwin Layton, as superbly depicted by Patrick Wilson, and to a lesser extent his Japanese counterpart. Bravado, not unexpectedly, also plays a significant part in proceedings.

Unlike most other movies, which tend to concentrate on only one or two key players, Midway showcases the talents of several characters, giving them each an opportunity to strike a chord with cinema goers.

As such, it is a film with many moving parts and the focus shifts back and forth to present the full picture.  We are all the better for it because it gives the movie greater depth than would otherwise be the case.

And, as is the hallmark of so many of Emmerich’s films, the cinematography by Robby Baumgartner and special effects are masterful.