The promo says Winchester was inspired by true events. 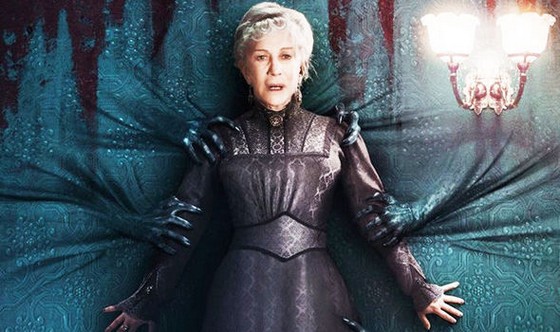 It’s 1906. On an isolated stretch of land near San Francisco sits reputedly the most haunted house in the world. Built by Sarah Winchester (Helen Mirren), heiress to the Winchester rifle fortune, construction continues 24 hours a day, seven days a week. It’s been like that for years. The house stands seven stories tall and holds nearly a hundred rooms. For all intents and purposes, it looks like Sarah is building a prison; an asylum for hundreds of vengeful ghosts that have a score to settle with the Winchesters.

Sarah is a widow who lost a child. She lives in the rambling house with her niece Marion Marriott (Sarah Snook) and Marion’s son Henry (Finn Scicluna-O’Prey). To an outsider, the house looks like a monstrous monument to a disturbed woman’s madness; but is it? Dr Eric Price (Jason Clarke) – who has his own issues – arrives at the home to assess Sarah’s mental state.

The Spierig Brothers (Predestination) directed from a script they co-wrote with Tom Vaughan (Unstoppable).

Winchester is a wholly unworthy period horror. It’s dull, confusing and repetitious. The real sleight-of-hand here was somehow convincing Helen Mirren to play the lead. Overall, much of the acting feels forced and wooden. Even the grand dame looks decidedly unconvincing. The words that tumble out of her mouth appear contrived.

The filmmakers have just trotted out the well-worn tropes of the genre – creaks, “tense” music, apparitions, eyes whited out and walls that cave in. Running around a haunted house with occasional scares is hardly inspiring stuff. The problem has a lot to do with the inadequacies of the script. The whole thing just doesn’t ring true and the way it looks on screen is decidedly clunky.

Let’s face it, Winchester is, indeed, a clunker. I walked away knowing I’d just wasted more than an hour and a half.