Queensland Theatre is putting the emphasis on fast and furious fun at the Cremorne Theatre as the comic adaptation of John Buchan’s novel and Alfred Hitchcock’s film, The 39 Steps, woos capacity audiences.
The Master of Suspense brought John Buchan’s much loved 1915 Boys’ Own story to the big screen in 1935. But it’s a stage version, featuring four actors playing more than 100 characters, that’s had the world laughing for the past dozen years or more. 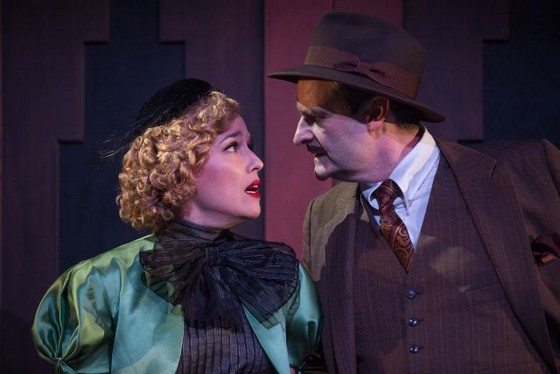 Patrick Barlow’s very British stiff-upper-lip period comedy has been a crowd-pleaser just about everywhere, including the West End and Broadway. In 2012 it made him the most-performed playwright in America.

This remarkably versatile spy yarn works surprisingly well as a comic caper with QT actors Hugh Parker, Liz Buchanan, Leon Cain and Bryan Probets creating some mind boggling routines under the direction of Jon Halpin.
The actors’ timing is spot on and Barlow’s script takes its audience just far away from the original versions to let everyone know it is all a rollicking joke.

The story of falsely accused Canadian ex-pat, Richard Hannay (Parker – the only player with a single role), who finds himself on the run from gangsters, spies and the police, rattles along at a frantic pace with the minimum of sets and props. 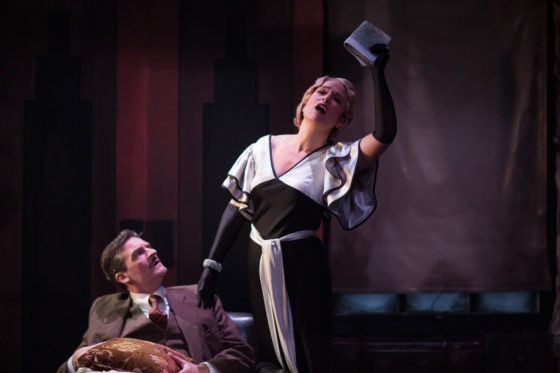 Along the way there are lots of references to Hitchcock classics such as Rear Window and North by North West, but it’s the performances which keep the action alive. This show is a must see antidote to all the miseries swamping our world; although it might be difficult grabbing a ticket or two. Still give it a try – it’s worth it.

The 39 Steps from Queensland Theatre (in association with State Theatre Company South Australia) is showing at the Cremorne Theatre, QPAC, Brisbane until 28 March 2018.  Bookings via qpac.com.au or 136 246