What a lot of fun I had watching The Longest Minute. It had a terrific script, was filled with an array of great characters, had a brilliantly human storyline, and moved as fast as a winger with a try scoring intercept. And it all revolves around the 2015 NRL Grand Final and a Townsville family of North Queensland Cowboys fans.

If you’re a league fan you’ll love it; and if you have no sporting interest whatsoever you’ll still love it. 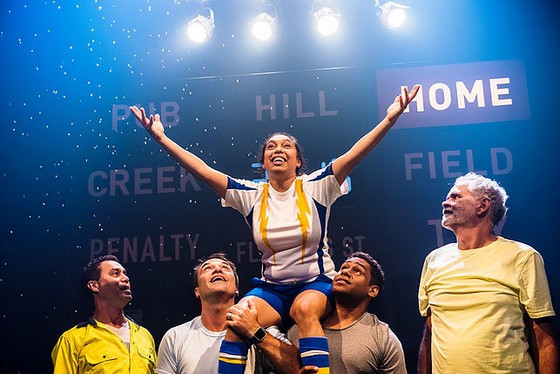 The program asks “where were you on NRL’s Grand Final night in 2015?” Well I was sitting in front of a TV set watching my team, the Brisbane Broncos, and the North Queensland Cowboys fight out a battle of epic proportions in this all-Queensland final. I saw the fatal extra time Jonathon Thurston field goal that sealed the first premiership for the Cowboys and heartbreak for the Broncos

A master playwright could have “scripted” the magical game – with its moments of screaming tension and human error. It inspired the director Bridget Boyle, an avid Cowboys fan, and writers Robert Kronk and Nadine McDonald-Dowd to create this production. And what a creation it turned out to be.

Around 80 minutes long – give or take few minutes for stoppage time (laughs) – this was as entertaining as the Grand Final itself. The play has everything: hilarious moments, serious moments, deep emotional moments and a few social issues as well.

The evening began with some of the ensemble cast members geeing up the audience – they are all Cowboys fans. Then the tale began with the formation of the Cowboys in 1995. It explains how the history of the club wove into the Wright Family – Aboriginal Frank (Mark Sheppard), a football player before the Cowboys who was known as the Black Flash, his white wife Margaret (Louise Brehmer), football mad daughter Jess (Chenoa Deemal), talented footballer Laurie (Jeremy Ambrun) and Uncle Gordon (Lafe Charlton). David Terry, in a multitude of guises made up the cast.

Jess, who was born in the debut year of the Cowboys, is the narrator who links the scenes. She wants to be a footballer like Matt Bowen and plays in the mixed under 13 team. And she is good, better than most of the boys, discrimination says will be dropped from the team when she reaches puberty – because girls are different. Chenoa Deemal is just brilliant in the role as she plays the little girl and morphs into an adult

Laurie on the other hand has talent but no wish to be a football star. He is an introvert who emotes little but simmers inside. This was a lovely low key performance. Frank the footie fanatic lived his life through his son and was doomed to disappointment. This was another well acted role. 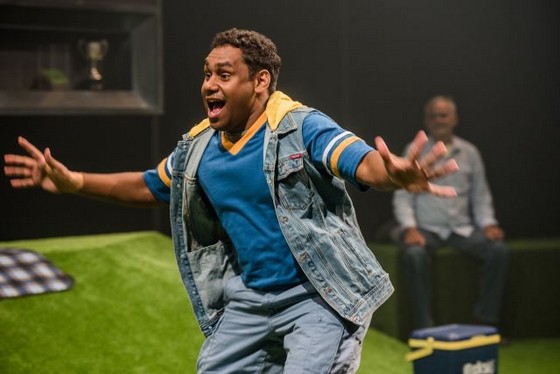 Louise Brehmer’s performance was outstanding as she switched from high comedy to dark tragedy. She had the audience laughing out loud at times and silent in her grief in others. She was an indomitable character. Lafe Charlton had less to do as Uncle Gordon, but he did it well in laconic style.

I also loved Simone Tesorieri and Simona Cosentini’s set, which was simple and so clever. It was the edge of the football fields with a scoreboard that told us where we were – on the field, in the pub, by the creek, at home, on Flinders Street – there was never any problem following the action.

What a great team and well led by Bridget Boyle.

The Longest Minute is a co-production of Queensland Theatre, Debase Theatre Productions and JUTE Theatre Company. It’s playing at the Cremorne Theatre, QPAC, from 26 May to 23 June 2018. Bookings: qpac.com.au or 136 246.