This is quite an amazing play; I certainly place it among the funniest plays ever written. It was first produced in 1982 and in various forms and rewrites has been performed regularly ever since on stages around the world. It is the classic farce that has dateless characters, hilarious dialogue, and a sequence of slapstick moves that demand perfect timing from all the actors. I have seen it several times before – the last time in 2015 at the Brisbane Arts Theatre and yet on this opening night I still laughed as hard as I have before.

The action for this play within a play runs for more than two and a half hours with just one break in the frantic workload needed to keep the show moving. But move it did. There was an occasional drop in pace at the start but this soon warmed as the audience gave the actors all the love they needed to present a winner of a show. 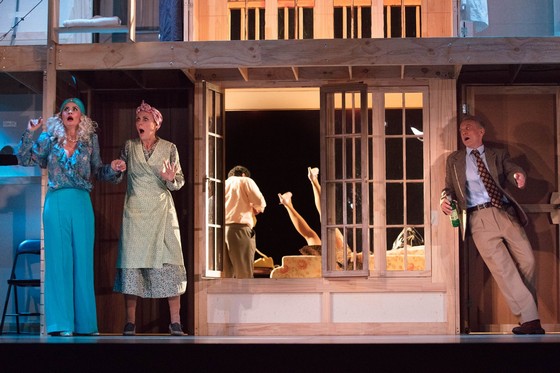 Of course it takes top-flight actors to make such a play work and Sam Strong has assembled a great cast that worked magnificently as a team. Even the set is brilliant. It is two storeys high and completely reversible. Act one is the dress rehearsal for the farce Nothing On. It is played on a theatre set, while the second is back stage as the play is being performed.

Nothing On is a bad farce with a cast of second rate actors with delusionary egos on a provincial UK tour. It is set in a 16th-century, modernised home which is being rented out while the owners are in Spain. Girls wander around in their underwear, men lose their trousers, and doors continually bang open and shut at the wrong time and the cast is hopelessly unready, and baffled by entrances and exits, missed cues, missed lines, and bothersome props, including several plates of sardines.

Act two is eye-wateringly funny as insecurities rise to the fore and everyone is busier off stage than on with flowers, whiskey bottles, fist fights, and even an axe.

In Act Three, which was tacked onto the end of the second act, the audience is privy to a performance at the end of the run, when things have gone from bad to worse. The actors try to cover up the mounting series of mishaps, but it was not long before the plot was abandoned entirely and the more coherent actors tried to salvage the production with some hilarious and hopeless ad-libbing.

While all this is happens there are illicit love affairs, jealousies, a burglary and mistakes happening left right and centre plus a director driven frantic by his hopeless cast. This was Lloyd, played with a devastating charm and cutting sarcasm by Simon Burke. 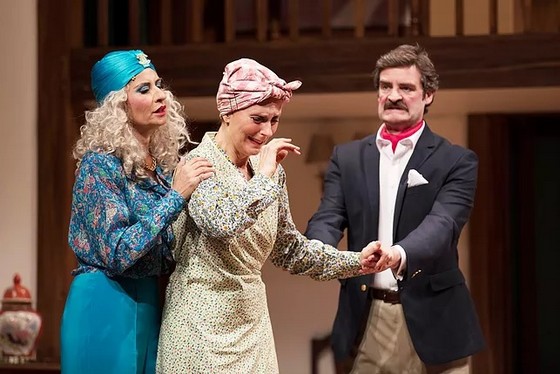 Assistant stage manager Poppy, is played beautifully by Emily Goddard as she is harassed by everyone; the put-upon Stage Manager/understudy Tim was played nicely by James Saunders; Louise Siverson is a delightful Dotty, the ageing star who plays the housekeeper Mrs Clackett in Nothing On while Ray Chong Nee is a Garry Lejeune, the stuttering actor, who goes completely to pieces in the final act as he plays the estate agent in Nothing On and brings the lovely Brooke to the house for an illicit assignation.

Brooke is played by Libby Munro who spends her time in the play running around in her pretty white underwear and bringing her fair share to the comedy. She handles this vague airhead cleverly as she determinedly performs all of her Nothing On lines out no matter what the circumstances.

Steven Tandy is a delight as Selsdon, the elderly drunk who plays the burglar in Nothing On. He obviously had a ball missing entrances, chasing scotch bottles and generally being undesirable. Finally there are Philip and Flavia Brent, the owners of the house who have sneaked back from Spain to spend a wedding anniversary night alone.

Here we have two more marvelous interpretations from Hugh Parker and Nicki Wendt. Parker is a laugh a minute as the actor Freddy, insecure and susceptible to nose-bleeds and the one of wants to know his motivation for carrying a box into a room. Like me, most of the audience loved the play and I’m sure added several minutes of laugh time to the advertised length of the play.