L’Appartement: Chaos in the City of Love is a play with lots of laughs, dark moments, some excellent acting from a top team and a set I’d be happy to live in! Joanna Murray-Smith worked hard as a director to bring her words to life, and it’s not an easy job. 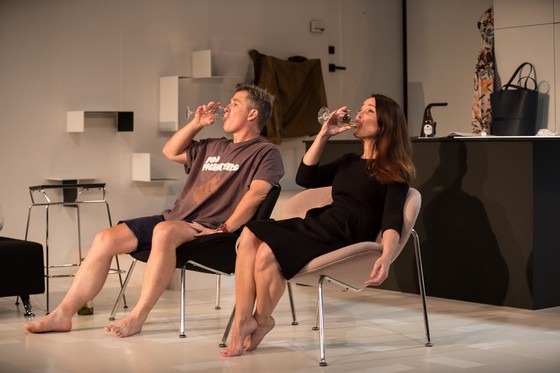 The plot sees an Aussie couple Meg and Rooster, played very convincingly by real-life couple Andrew and Liz Buchanan, on a dream holiday in Paris. Away from their three year-old twins and in an expensive-looking Airbnb, it’s a chance for these parents to just be themselves. But when they pick up the keys from their departing hosts – Serge and Lea, a so cool, overachieving young French couple – all it doesn’t take long for the trip to deteriorate into a two-way slanging match, which covers all the emotions and of course racism because Serge is black. It was a sort of ocker Who’s Afraid of Virginia Wolfe?

The performances were spot on and the actors had the opening night audience silent with compassion, pushed to anger at the futility of the marital exchanges or laughing out loud at the comic dialogue as the pair got stuck into the wine and became slowly inebriated, Meg more so than Rooster. The scrip edged neatly from light to dark and the laughs turned easily into silence as the untapped anger flowed. I’m sure people will take sides in the marital argument: is Meg right or too judgemental on Rooster? I made my choice.

It was a long and exhausting journey for the pair, for it was two-actor show for most of the night. The French couple were played with perfect accents, coached by Helen Howard, by Pacharo Mzembe and Melanie Zanetti. They were in the first few minutes to help character development and then disappeared until about ten minutes from the end. It seemed a waste of two fine actors.

A $500 bottle of wine takes centre stage for a while, and I fairly obvious that something is going to happen to it, and then huge and mysterious package arrives, which the drunken Meg decides to break all the rules and unpack it. It turned out to be a two-metre high stone primitive fertility statue. Beats me how they moved the thing without a forklift! More folk philosophy follows this discovery.

Despite all the fun it didn’t grab me 100 percent. The French accents weren’t on stage long enough for the ear to become attuned to the sound so bits of dialogue were lost and I wondered why Paris? (London maybe and so delete the need for accents). Program notes say the author based the play loosely on a holiday she had in Paris. 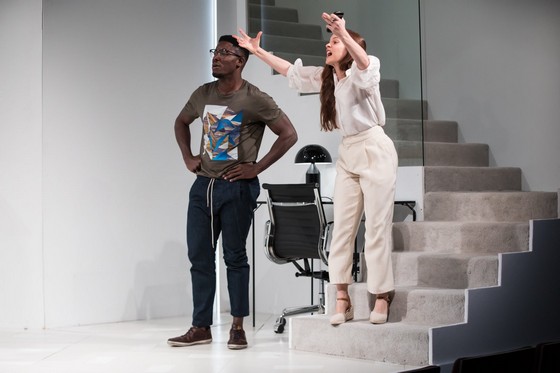 The play however is pure Aussie for most of the time. The culture clash was lost in the exchanges between Rooster and Meg. The dialogue could have taken place anywhere and I found it difficult to accept that this twelve-years married and still in love couple who arrived in such a happy state could slide in recriminations with no obvious trigger. And that anyone would cut open a huge parcel meant for someone else I found highly questionable, not mention having the strength to carry on such a huge stone object…

But that’s just me – maybe I missed something.

Queensland Theatre’s L’Appartement: Chaos in the City of Love is at the Cremorne Theatre, QPAC until  31 August 2019. Bookings: qpac.com.au or 136 246.