We all know someone who is hard at work, trying the meet quotas and deadlines or just trying the make ends meet. They are our parents, children, siblings, and partners. Yet it’s not often one will find a piece of theatre that really represents these people. Michele Lee’s Rice as presented by Queensland Theatre, Queensland Government and Griffin Theatre Company is an award-winning script and that was clearly demonstrated opening night. Lee’s dialogue was fast-paced, engaging and at times, gripping. 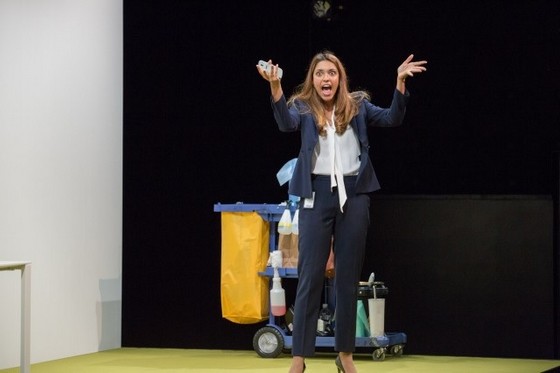 It follows the story of two characters, Nisha, played by Kirsty Best and Yvette, performed by Hsiao-Ling Tang. Nisha Gupta is an EO, an Executive Officer for a company called Golden Fields. It deals in, you guessed it – rice.

Yvette Tang is the cleaner of Nisha’s 20th floor office. At first she’s the subject of much complaint for not doing an efficient job. As the play progresses, these two women begin to see through the antagonism and strike up an unlikely friendship. They slowly yet surely open up to one another and even get to the stage where formalities are dropped and advice shared.

Rice is a poignant reminder that we are all human, regardless of our social standing or occupation. The characters are all relatable as either someone we’re familiar with or someone we know. Nisha looks to Yvette for reassurance and support and offers it in turn, something we all do for our loved ones and friends.
The play unfolded in a razor-sharp manner and as each actor took on different roles to expand the story, the audience was drawn in to this often charmingly endearing and relatable world.

It didn’t really feel like there were only two members in the cast, which really displays the skill both Best and Tang possess as craftswomen of their art. As those 90 minutes flew by the audience couldn’t help but be sucked into this world of empowering women and their experiences with ordinary Brisbane life and the things that happen to them. 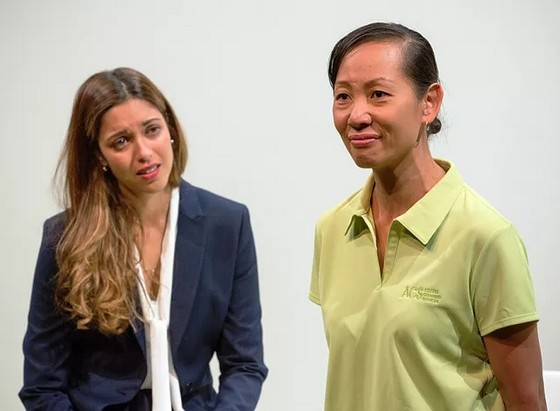 Rice is all about breaking stereotypes and boundaries. It was a refreshing sight to see. What I enjoyed most about this performance was the neat, compact, and fuss-free manner in which it was performed. The design of the set and costumes, the lighting and inter-scene transitions were all carried out perfectly and complemented the performance very well.

What made for an enjoyable evening was the fact that the chemistry between each cast member was relaxed and worked well, producing an acting style that was natural and unforced on stage.

As always, for those looking for an enjoyable night out Queensland Theatre delivers consistently an array of productions that produce heart-felt performances and memorable nights.