A Pacifist’s Guide to the War on Cancer is heartfelt, bold, funny and heart-wrenching. It’s also a flawed blancmange as a piece of performance art that many will, no doubt, applaud.

I love the energy and vitality of Bryony Kimmings. She’s one of the playwrights, and the narrator of the piece. The single mum tells a story of cancer and its ruinous tentacles. She finds the fear and pain that goes with it, but also the fight and the will-to-live attitude that some adopt in their battle. Brian Lobel and Kirsty Housley are the other writers. Housley also serves as director; while Tom Parkinson is responsible for the music. 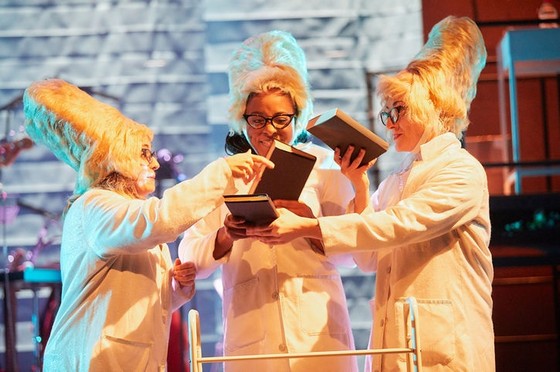 It’s impossible not to be deeply moved by the plight of the young woman who changed Kimmings’ life, Lara Veitch. That’s not to overlook a late entrant, who on opening night made his presence felt by opening up his private life in a very public way – because doing so could help others. So you can already see there’s a lot to appreciate about the show.

But it’s also like a box of chocolates – not every flavour will be to everyone’s liking.

On the plus side is Kimmings’ wonderful delivery and turn of phrase. She crafts neat interchanges with the four actors/singers – Eva Alexander, Gemma Starr, Lottie Vallis and Elexi Walker. Then there are the intimate moments she shares with a cancer survivor, who has faced more trauma than most will face in their lifetimes.

The songs, though, aren’t very good; nor are they all that melodic. That starts with the first song. You can’t actually understand what’s being sung because the music is so overpowering. It didn’t need to be. If the words are important, then let us hear the words!

I quickly came to the conclusion that the music was largely, if not totally, unnecessary. It was just a distraction. I say that as someone who loves musicals and sees many of them … in fact four in four days, only last week. In this case though, the narrative alone – with perhaps the soundscape of an MRI machine, when appropriate – would have been enough. That could also have served to wind back the running time, which would have been fine by me. 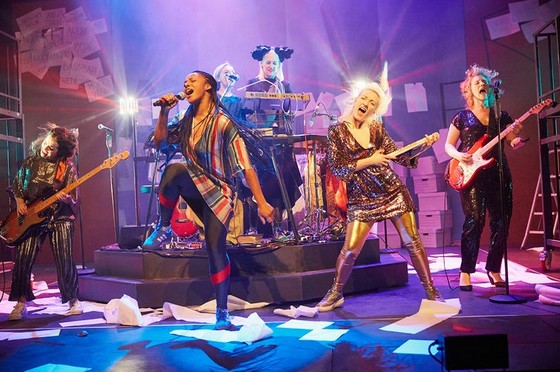 A Pacifist’s Guide to the War on Cancer had an experimental feel. Let’s just say some parts of the experiment worked better than others. For instance, I wasn’t sold on the way the playwrights handled the outcome of one diagnosis … best described as white noise. But to each their own. The ending is emotion-charged. A feeling of intimacy envelops the stage. I dare say there wasn’t a dry eye in the house.

So, A Pacifist’s Guide is a mixed bag that has the right motivation but is, on occasions, let down by its execution.

Finally, a brief word about the staging. It’s minimalist – just a couple of large, black elevated trolleys, supporting desks and chairs – save for a late reveal.

A Pacifist’s Guide to the War on Cancer is playing at Merlyn Theatre at Malthouse Theatre until 18 March 2018.