My Dearworthy Darling from feminist theatre mavericks THE RABBLE is an esoteric mix of past and present.

In modern day Australia, the marriage of a middle-aged couple is in real trouble. They are being pulled apart by mistrust, paranoia and violence. The woman is left scared and scarred. She’s trapped in a very unhappy situation. Her cause isn’t helped by her sister, who sides with her husband and thinks she’s mentally ill. The husband goes from picking fights to melting down.

In medieval England a woman lies on a rock and has mystic visions that are regarded by the patriarchs as female madness, but she knows the truth. She is enveloped by a group of seven sisters of the cloth and anointed. They join in song. She even comes to wear the equivalent of a crown of thorns. Her closing monologue is delivered naked as she frees herself from the naysayers.

Elements of the play are delivered in old English. A number of these expressions appear as surtitles above the stage (as they do in opera) but still in the old English. So if you can’t understand what they’re saying, you still won’t by reading it. 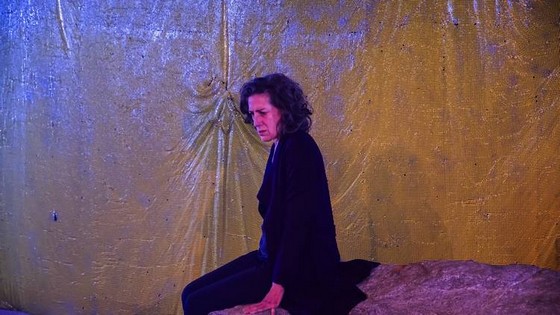 My Dearworthy Darling is a piece for selective tastes  Not everyone will embrace it. Some will regard it as a work full of artistic merit, while others will resile from it.

Jennifer Vuletic (the wife and anointed one), Ben Grant (the husband) and Natalie Gamsu (the sister), give solid performances. But there’s no straight narrative here. Rather, it has a poetic quality to it. Writer Alison Croggon’s work  draws on the writing of medieval mystics, specifically 14th century mystic Margery Kempe. The piece is about trauma, about how people are pressured and broken by the dehumanisation of modern capitalism. Further, we can’t ignore our emotional and spiritual needs without paying a terrible price.

As strong as it was creatively, if you add the sound, lighting and costumes, I found it quite the head spinner.

Directed by Emma Valente and Kate Davis, My Dearworthy Darling is playing at Beckett Theatre at Malthouse Theatre until 18 August 2019.