Sometimes trailers can be misleading; but sometimes they’re spot on. Like the trailer for Robin Hood, for example. Its trailer made it look, well, dreadful. And it was completely accurate.

Director Otto Bathurst has jerry-rigged a kinetic mess of a movie. Tightly choreographed fight scenes and a thumping score reminded me Guy Ritchie’s more bombastic moments. But Bathurst isn’t channelling Ritchie, he’s channelling video games. This is Robin Hood imagined as a chapter of Assassin’s Creed (and we all know how the movie version of that game went). 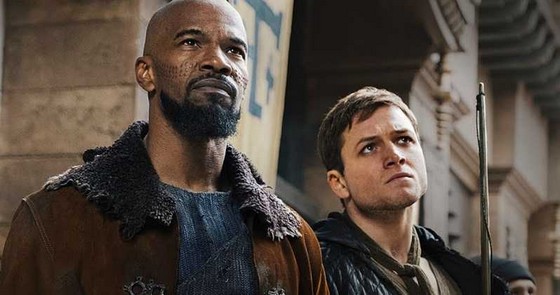 Bathurst gives a hint at the beginning, when a voice-over tells the audience to “Forget history”. What he means, I think, is forget any thoughts of a traditional Robin Hood movie. This isn’t medieval England, it’s a kind of alternate universe with maybe some hints at, you know, actual history. Of course, the Robin Hood tale is itself a folk story, so any claim to historical accuracy is tenuous anyway. But this is so far from anything grounded in reality, it really should be classified as fantasy.

Everything kicks off when Robin of Loxley (Taron Egerton) meets Marian (Eve Hewson). Bliss ensues. That is till the nasty Sheriff of Nottingham (Ben Mendelsohn) sends him off to the crusades. In the battle, Robin encounters Guy of Gisbourne (Paul Anderson), another nasty piece of work. Guy decides to do something horrible to the son of a Moorish commander (Jamie Foxx), but for reasons I still can’t follow, Robin decides to intervene. Sent back to England, Robin finds Nottingham in a state of essentially martial law. The Sheriff is demanding more and more from the people to fund his “war tax” with the compliant aid of the church. He also finds the commander (now dubbed John) has followed him back to, I guess, thank him. They hatch a plan to inveigle Robin into the Sheriff’s good graces by day, while stealing from him at night.

Novice screenwriters Ben Chandler and David James Kelly cobbled together the shambolic script. Between them and Bathurst, the film ticks off virtually every action movie cliche. Some of the dialogue is truly awful. And I found the choice to include modern Americanisms in the speech irritating. Chandler and Kelly don’t give any of the characters much depth, so much so that the bad guys quickly descend into stereotypes. The film never pulls a surprise, and a sub-plot involving Will Scarlet (Jamie Dornan) is just plain dumb.

The whole thing looks depressing thanks to a mostly grey colour palette; and it’s not helped by Joseph Trapanese’s stodgy score. On the plus side, some of the action set-pieces are quite exciting, even if they get more preposterous as the film goes on.

Taron Egerton (Kingsman: The Golden Circle) plays the title character like a lad down the local boozer. That said, he acquits himself well in the action sequences, which are basically what the film is about. Jamie Foxx (Baby Driver) plays second fiddle as John with a continual scowl; which is pretty much what Jamie Dornan (Fifty Shades Freed) does as Scarlet. Eve Hewson (Bridge of Spies) gives Marian a fiery edge. But none of them get much in the way of actual emoting to do. Australia’s own Tim Minchin pops up as a comic Friar Tuck for a little light relief. And fellow Aussie Ben Mendelsohn basically rehashes his one-note baddie from Rogue One as the Sheriff.

From its lazy script to its emphasis on style over substance, Robin Hood epitomises just about everything that’s wrong with contemporary big-budget movies. No doubt there’s an audience for it, but for this sloppy film, that’s setting the bar very low. And worst of all, it’s not even fun.