It is cheeky, irreverent, elegant, stylish and a sequel that begs you to have seen the original. That is Kingsman: The Golden Circle. Co-writer and director Matthew Vaughan – along with his collaborator Jane Goldman – introduced us to the Kingsmen, an independent self-funded British spy organisation, in 2015.

Dedicated to keeping the world safe, the masqueraded as high-end tailors and looked like they had just stepped out of a Savile Row front window. Among there number was Harry Hart (aka Galahad, a suave gentleman played by Colin Firth with grace, charm and the ability to wield a lethal umbrella). Merlin (Mark Strong) was the organisation’s fastidious Scottish tech guru, while Eggsy (Taron Edgeron) was a kid from the wrong side of the tracks and taken under Harry Hart’s wings. Kingsman: The Secret Service was a no-holds barred, inventive actioner that played with and subverted the tropes of the spy genre. 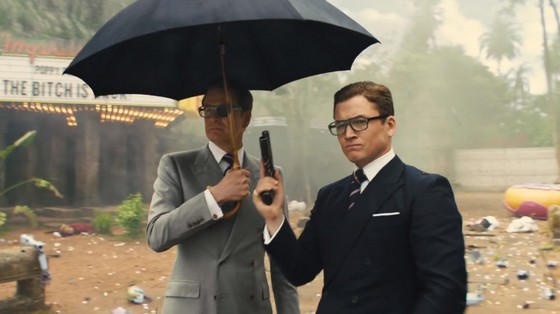 All those I referred to are back for this sequel, in which Eggsy and the Kingsmen team up with an American equivalent organisation – Statesman – to tackle a megalomaniacal, deluded villain, Poppy (Julianne Moore) with designs on taking over the world. Poppy operates out of an ancient ruin in Southeast Asia, where she has constructed Poppyland, a theme park complete with all things Americana, including a beauty salon, bowling alley, concert hall and diner. Eggsy is now in a relationship with Princess Tilde (Hanna Alstrom), the Swedish monarch whose life he saved at the end of The Secret Service. Among the Statesmen are Agent Champagne (Jeff Bridges), Agent Tequila (Channing Tatum), Agent Whiskey (Pedro Pascal) and Ginger Ale (Halle Berry). Their front, not surprisingly – given their names – is a distillery. A hard swearing Elton John also plays a surprisingly large role and his appearance and exploits are among the biggest crowd pleasers.

In keeping with its pedigree, Kingsman: The Golden Circle’s premise and execution have a decidedly manic quality. I was undeniably engaged by the colour and movement. Look at this as a very trippy or out there James Bond, if you like. Some of the humour works a treat. The audience laughed. A number of scenes have a delightful edginess about them. Taron Edgerton makes for a debonair leading man, while Colin Firth has dignity written all over him. In Kingsman, suiting as a whole is superlative. Julianne Moore positively revels in the role of the smiling assassin, the unhinged villain with an attack dog mentality.

Having thus far sung the movie’s praises, let me turn to its negatives. It had a number of flat patches and it outwore its welcome. It went on for far, far too long and overindulged in the malarkey. So, I definitely had fun with it, but the silliness was not without its drawbacks.