Of all the subgenres in crime fiction the accidental detective is one of the toughest to pull off as a series. Particularly when that detective is stuck in a small country town. If only because of the suspension of disbelief becomes harder as the series goes on. Even for established detectives, too much complicated crime in a small radius can start to seem a little coincidental (Midsomer, anyone?). 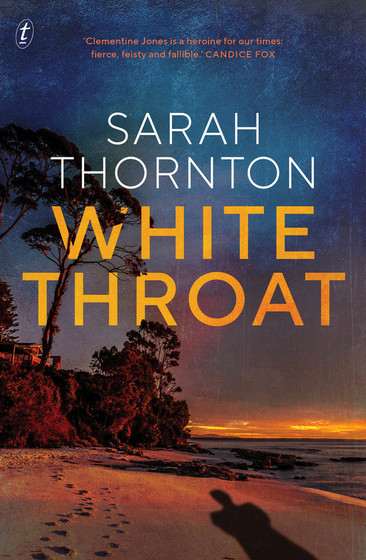 So the question was – how would Sarah Thornton follow up her debut Lapse, the story of an accidental detective solving a crime (while coaching the local football team) in rural Australia? She solves this problem by sending her protagonist, fallen lawyer turned successful football coach, Clementine Jones away from country Victoria to go house sitting on the Queensland coast. She then gives Clem a personal reason to start digging into some nefarious goings-on. That reason is the death of her “aunt” (and one time surrogate mother) Helen who had moved to the small town of Pirama and had been spearheading attempts to save the endangered white throated turtle (hence the name of the book) before her untimely death which is quickly ruled a suicide by authorities.

Once readers can get past the string of unlikely coincidences that get Clementine into a situation in which she feels obligated to solve another crime, Thornton delivers another pacey thriller filled with hot button issues. There is plenty going on in Pirama which would be threatened by the green activism that Helen represented. Plans for the construction of a coal port, local retirees ripped off in a Ponzi scheme trying to maximise their property values, rapacious developers looking for locations for new resorts. And so there are plenty of suspects for Clem to investigate, although she is not a trained detective so her methods are, once again, more crashing than crashing through. She joins Helen’s environmental group and uses that position to get in the face of the people she suspects, a move which she knows will put her in the cross hairs. At the same time, she is dealing with one of the players from her team, and occasional partner in crime from Lapse, Matthew Torrens, who has come to stay with her but is also looking to lie low. Their relationship falters when Clem reveals her intention not to return to Katinga and continue coaching the team but to take a new legal job in Melbourne.

While the circumstances that get her back into action are a little contrived, it is enjoyable to follow the further adventures of Clementine Jones. Clem is a great character – clever, resourceful, determined, prepared to bend the law when she feels she needs to and often out of her depth (at one point literally) as the action heats up. This book also plays on Clem’s conflicted loyalty to the town that took her in and the football team that she coached to a championship win and her desire to get back to a normal, anonymous life in the city.

As with many writers who start with Australian rural crime, Thornton has transferred her action from the bush to the coast (Chris Hammer, Sarah Bailey and Jane Harper have done similar shifts). She has centred the action around real environmental issues and the plight of an actual and fascinating (if only for its method of breathing, no spoilers) Australian endangered species. And in White Throat she has also delivered another fast-paced crime thriller anchored around a flawed and engaging heroine.