Alex (Jack Michel) is as introverted as they come. He’s also a germophobe who disinfects at every opportunity. In fact, he goes out of his way to avoid others unless absolutely necessary – which includes turning his back on people in distress. He’s heading from Brisbane to Melbourne and is frequently writing into his little notebook. We only find out why much later into the movie. 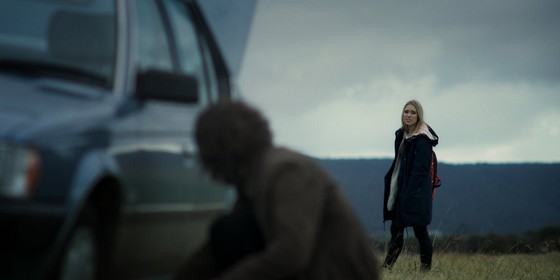 After an incident at a petrol station, Alex almost runs over – then pulls away from – a young hitchhiker, Lily (Senie Priti). The next day, Lily bumps into him again and tries to engage him in conversation. She’s a free spirit – friendly, outgoing and curious – but Alex gives her the brush-off. Circumstances however conspire to see them travelling together in his barely operating cerulean blue car. Gradually, the film reveals why they’re both on the road.

Cerulean Blue is an independent drama with comedic flourishes – a thesis on love, loss and all things in between. First-time feature writer-director Adrian Ortega draws on experiences tackling depression and isolation in his early 20s. The film is slow going. It takes a long time to build up any momentum and by then you may have switched off. Ortega uses the idea of the pregnant pause throughout the picture.

The film displays a few artistic touches – including at one stage using still frames like postcards – that weren’t really necessary, but added a small element of interest. Still, I’m afraid there wasn’t enough in the narrative to sustain me. The idea was sound, but I felt more substance was needed to pull it off.