Blended families can be problematic.

So it is when Minna (the voice of Robyn Dempsey) becomes sister to Jenny (Emma Jenkins). Minna’s dad John (Tom Hale) and Jenny’s mum Helene (Karen Ardiff) are engaged. Minna has a great relationship with her father … and her adorable hamster Viggo Mortensen. Jenny is a lot harder work. Minna and John live in the country. Jenny and Helene are city slickers who join them. Jenny, who constantly buries her head in her mobile phone, and is seemingly never done posting Instagram photos, is bossy and unsympathetic. Minna is used to giving and caring (playing regular chess games with her dad, for instance). 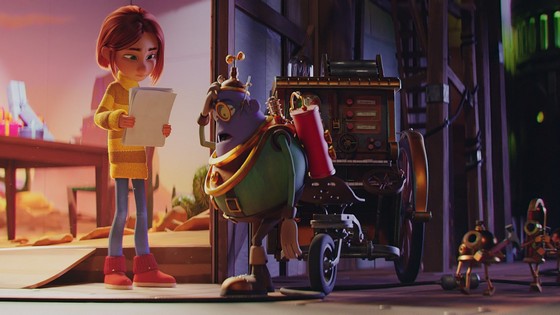 Jenny literally takes over Minna’s bed and insists the rodent is caged rather than allowed to roam freely. Her aim is to get rid of the thing she calls a rat, altogether. John makes it clear he expects Minna to compromise to help settle the newbies. Minna is, understandably, none too happy that she is the only one subject to the “heavy lifting”. We get the two girls’ respective back stories concerning what happened to Jenny’s father and Minna’s mother toward the end of the movie. A regular vivid dreamer, Minna frequently finds herself lost in her dreams. One day she breaks the dream code, that is she inadvertently discovers that a bunch of robots cleverly stage people’s nightly ritual.

One dream maker named Gaff (Luke Griffin) has allowed himself to get too close to Minna and reluctantly allows her to observe how it all works. By doing so, he risks being demoted to “janitor” by the officious, by-the-book inspector (Brendan McDonald). Then, as things continue to deteriorate at home with her stepsister, Minna takes a more active position in Dreamland, with disastrous consequences.

I love the premise of this Danish animation. The cute execution of Dreamland in particular has been created as a throwback to a previous era. It’s done as a studio set up, where sets and props are crafted a la old-style Hollywood.  Dreambuilders delivers its messages of compromise, understanding and tolerance in an entertaining way. I became invested in the journey, irrespective of the fact that given its family-friendly nature the outcome was never in doubt. Undoubtedly my favourite moments were spent in Dreamland and the fantasy world the animators created. It’s an absolute delight, with missteps the order of the day. The third act became a bit too sugary sweet for my liking. Everything doesn’t have to be wrapped up in a neatly packaged bundle.

Based on an original idea by Kim Hagen Jensen (who directs alongside Tonni Zinck), scriptwriter Soren Grinderslev Hansen deserves credit for his efforts.  A bit of remaining tension would have been far more realistic, notwithstanding the fact that we are speaking about a make-believe animation. Nevertheless, with a few laughs and plenty of smiles along the way, overall Dreambuilders gets a thumbs up.