Greatness is never achieved by mere proximity. But that doesn’t stop thousands from trying to get close to their heroes. People feel the need to be a part of those who’ve transcended the mundanity of everyday life – whether in sport, business or art. It could be a piece of memorabilia, an autograph, or even just a tweet. But it’s something to hold on to. Phillippe Falardeau’s luminous My Salinger Year follows an aspiring writer who discovers the prosaic reality of fame and its attendant baggage.

I mentioned recently in discussing A Call to Spy, that it told an important story but in a stodgy way. My Salinger Year is that film’s polar opposite. Its “follow your dream” message wouldn’t be out of place in a Disney movie. But Falardeau (Monsieur Lazhar) tells the story in such a beautiful, elegant way, I’d be happy to forgive his film a thousand sins. 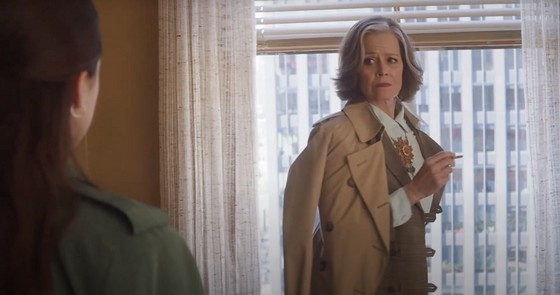 Joanna (Margaret Qualley) impulsively moves from her California hometown to New York. The English graduate wants to write, and New York is the place to do that. But trying to write doesn’t pay the bills, so Joanna applies for a job at a literary agency. Somewhat to her surprise, she lands the role and finds herself the assistant to director Margaret (Sigourney Weaver). It’s the mid-1990s, but Margaret won’t hear of computers. It’s all typewriters and dictaphones. Margaret is a strict – perhaps tyrannical – boss. But the company’s suave co-director Daniel (Colm Feore) helps temper Joanna’s experience. Joanna soon discovers the job carries one key “perk”. She has to manage fan mail for one of the agency’s most important clients, “Jerry”. But old “Jerry” is none other than Catcher in the Rye author and famous recluse J. D. Salinger.

Acting (apparently) on Salinger’s instructions, Margaret insists that Joanna never send any fan mail on to the author. Joanna must reply using set format letters drafted by the agency’s in-house lawyer Hugh (Brían F. O’Byrne). What letter gets used depends on the nature of the enquiry. Being so close to the legendary author is one thing, but Joanna struggles with fobbing fans off with rote letters. Meanwhile, she meets and another aspiring author Don (Douglas Booth). While he’s appealing in a disheveled kind of way, Don also writes relentlessly. The lack of a second income means the couple has to make do with a crummy apartment (it has no kitchen sink), and constantly scrimp to make ends meet.

It’s a little surprising that a film referencing perhaps America’s best-known author of the mid-20th Century is a Canadian-Irish co-production. Falardeau wrote the screenplay, based on the real Joanna Rakoff’s memoir of the same title. Not a lot actually “happens” in the film. It’s more a coming-of-age story (who didn’t see that coming?) than anything else. It follows Joanna’s experiences and growth as a person, so the protagonist’s journey is largely internal. The film shares something in common with those “mean boss” movies – notably The Devil Wears Prada – though this is rather more understated. And even if it lacks the excoriating wit of The Devil Wears Prada, like that film, this one has its heart in the right place.

And while the story is slight and the stakes relatively low, My Salinger Year is a treat in other ways. Falardeau blends exquisite cinematography (by Sara Mishara), fine performances, and a delicate score by Martin Léon into an intoxicating whirl of cinematic delights. He adds his own stylistic flourishes (including a ravishing fantasy dance sequence) to create something almost transcendent.

Margaret Qualley (Once Upon a Time… in Hollywood) confirms her status as one of Hollywood’s brightest rising stars with an engaging performance as Joanna. And while her character may be a little overshadowed in Falardeau’s script at times, she takes every chance to shine. Douglas Booth (Mary Shelley) is also good as the feckless and self-absorbed Don. Irish actors Brían F. O’Byrne (Before the Devil Knows You’re Dead) and Colm Feore (A Monster Calls) add touches of class. But another powerhouse performance from Sigourney Weaver (Ghostbusters – both of them) defines the film.

My Salinger Year is a little bijou of a film, a rare gem in a sea of plastic waste. And though it might not be a diamond, that doesn’t diminish its sparkle.