Quentin Tarantino has an army of loyal fans – and maybe just as many detractors. He’s controversial and outspoken, but you can’t ignore him. So a new movie from the auteur is always going to spark interest. But will audiences embrace his sprawling movie-land epic Once Upon a Time… in Hollywood? The answer is: it depends which audience you’re talking about.

Once Upon a Time… in Hollywood basically represents the apotheosis of Tarantino’s work, because it deals explicitly with what all his other movies deal with implicitly – cinema. In this case, he takes a deep dive into the cinema of the 1960s. From goofball comedies to spaghetti Westerns, Tarantino shines a light on the popular culture of the time. Sound good? Then this is the movie for you. 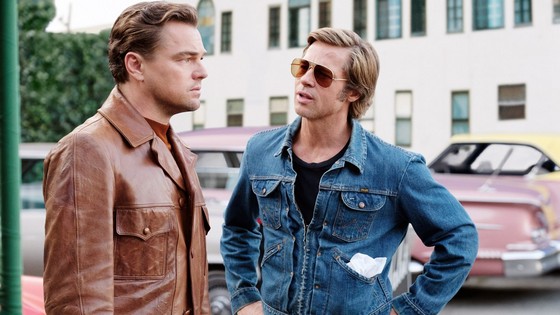 But Once Upon a Time… in Hollywood lacks a conventional narrative, which may frustrate audiences used to Tarantino’s usually tight plots. It’s more a discursive romp through the film industry of the time (with parallels to contemporary Hollywood). But it wouldn’t be Tarantino without some twists – and his trademark violence. The violence arrives late in the film, although a sense of dread pervades the film before exploding in the final act. It’s – loosely – based in fact. Tarantino uses the real-life crimes of the Manson family; but flips the whole thing. So it plays in much the same sandbox as Inglourious Basterds, which created a fictional “history” of World War II. This film similarly fictionalises the momentous events of 1969.

Of course, the title is a big clue – this is a fairy tale. It’s not history; it’s a rather macho fantasy about a fading star, a resourceful stuntman and the real drama of Sharon Tate and the Manson clan. The fading star is Rick Dalton (Leonardo DiCaprio). The once-popular TV cowboy feels age – and alcoholism – catching up with him. His best buddy (or maybe just most loyal servant) is Cliff Booth (Brad Pitt). Cliff has been Rick’s stunt double for years. He too feels the effects of a changing Hollywood, where mere loyalty is no longer enough. But perhaps a big break awaits Rick – and by extension Cliff – when director Roman Polanski (Rafal Zawierucha) and wife Sharon Tate (Margot Robbie) move into a mansion next door to Rick’s house on Cielo Drive. Polanski is the hottest young filmmaker in Hollywood after the success of Rosemary’s Baby. Rick muses he’s now “one pool party away” from starring in the next Polanski movie.

If you’ve followed the press, you’ll know Once Upon a Time… in Hollywood has run into controversy. Its cartoonish depiction of Bruce Lee (Mike Moh) is certainly problematic; as is its glib acceptance of the fact Cliff “killed his wife and got away with it”.

For much of its hefty 2 hour 40 minute running time, Once Upon a Time… in Hollywood meanders. Tarantino though still manages moments of brilliance. Two “movies within the movie” are gold. One features Rick playing the bad guy in a Western; while the other is fabulous re-creation of The Great Escape, inserting Rick in the Steve McQueen role. He also makes excellent use of flashbacks (which aren’t signposted, so it may take a moment to catch up). But dialogue chews up a lot of screen time, so be prepared.

The A-list cast is predictably excellent; particularly DiCaprio as the rather neurotic Rick. Brad Pitt counterpoints him brilliantly as the self-assured Cliff. Margot Robbie is fine as Sharon Tate, though her character doesn’t really have a lot to do. Fellow Aussie Damon Herriman gets a small role as Charles Manson. Several great actors pop up in cameos, including Damien Lewis doing a fabulous Steve McQueen; and Al Pacino as Rick’s colourful agent.

Once Upon a Time… in Hollywood won’t be to everyone’s taste. If you like conventional narratives tightly played out, you may find this film a challenge. But if you want to get “in the weeds” on 60s pop culture, the demise of the studio system and the characters of the time, this is the film for you. Basically, if you’re film nerd, you’ll probably love it.

By the way, if you want the real story of the Manson family and the effect of their crimes on Hollywood, I thoroughly recommend Karina Longworth’s excellent You Must Remember This podcast, which featured a full season on “Charles Manson’s Hollywood” in 2015. All the episodes are still available in the Archive at the show’s website and via your podcast app of choice.