A Dog’s Journey is true to its title, following on in the trajectory of its forerunner, A Dog’s Purpose (2017). The result is a contrived tear-jerker with plenty of heart; despite some serious overacting, 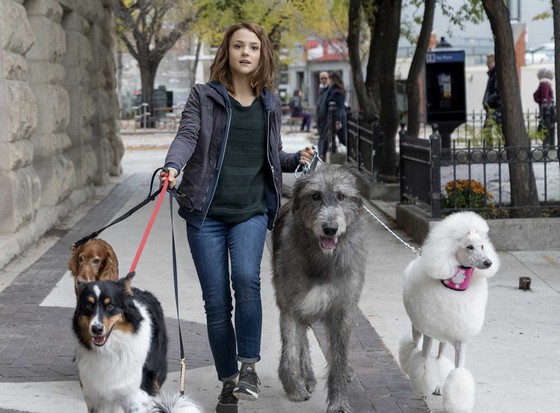 The dog of the title, Bailey (the voice of Josh Gad), is living the good life on the Michigan farm owned by Ethan (Dennis Quaid) and Hannah (Marg Helgenberger). Bailey’s new playmate is Hannah’s baby granddaughter, CJ. The problem is that CJ’s mother, Gloria (Betty Gilpin) has been in a really bad place since tragically losing her husband. Suspicious that Ethan and Hannah are only after her dead husband’s money, Gloria leaves with CJ. As Bailey prepares to leave this life, he makes a promise to Ethan to find CJ and protect her at any cost. Thus begins Bailey’s adventure through multiple lives, as CJ (Kathryn Prescott) and CJ’s best friend, Trent (Henry Lau) experience joy and heartbreak.

I’m a softie and a dog person, so I really wanted to lose myself in the storyline. When I wasn’t as conscious of the overplaying, I smiled and cried. I was comfortable with the performances of Prescott and Lau. Conversely, Gloria was at times excruciating to watch. Gilpin’s delivery was particularly heavy handed. And I didn’t buy into the “ageing and creaky” Quade, notwithstanding his good-natured characterisation.

This is the story of four dogs in one – that is the pooches live and die, but inside they are the same dog in different guises. Plausible? Highly unlikely, unless you believe in reincarnation, but it matters not because A Dog’s Journey is a family fantasy … and if you can’t get carried away in a fantasy when can you? Not all four plot lines are given even treatment, so the audience builds a greater affinity for some animals than for others, although all have charm.

The scriptwriters (four of the five who wrote the original, including W. Bruce Cameron, who wrote the books upon which the two films are based) have done a good job in the frequent verbalisation of doggie thoughts. It’s always Bailey doing the talking so Josh Gad has to do the heavy lifting on that score, which he does so with relish. Gail Mancuso (best known for her work on TV series, including Modern Family) directs.

The best way to enjoy A Dog’s Journey is to go with the flow and not think too deeply about it. Otherwise, you’ll end up being consumed frustration.