Many of us have pondered the meaning of life … whether we are here for a reason. The dogs featured in A Dog’s Purpose are asking the same questions.

From director Lasse Hallström (The Hundred Foot Journey) comes the heartwarming story of one devoted dog – Bailey (the voice of Josh Gad). He finds the meaning of his own existence through the lives of the humans he teaches to laugh and love. 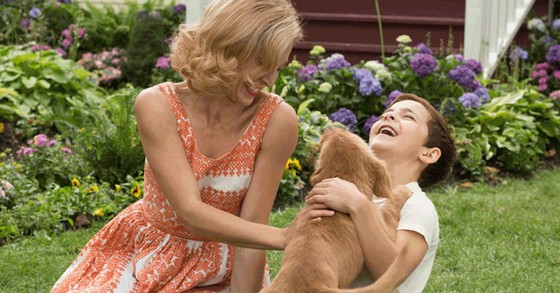 We first meet Bailey in 1962 as an adorable but mischievous Golden Retriever puppy that finds his way into the arms of eight-year-old Ethan Montgomery (Bryce Gheisar). Bailey and Ethan have countless adventures together, but Bailey’s long life as a beloved family pet is just the beginning of his journey. Reborn as a puppy again and again over five decades, Bailey wonders whether he will ever find his purpose.

Not only is this the story of a dog’s life, but also a dog’s eye commentary on human relationships and the unbreakable bond between man and his best friend. It is based upon author W. Bruce Cameron’s best-selling novel of the same name, which became a New York Times number one hit upon publication in 2010, spending more than a year on the best sellers’ list. It has been translated into 20 languages and published in 29 countries, even spawning a sequel, A Dog’s Journey, which was published in 2012.

Cameron was moved to write the original novel when the woman he was dating lost her dog and she was having a difficult time processing her grief. “We were driving up the California coast on the 101 freeway and I was hurting for her. Out of nowhere, as if I downloaded it off the Internet, this story came into my head about a dog who doesn’t actually die, but is reborn … and develops the sense that there might be some purpose why this is happening.” The passenger Cameron was consoling was his future wife – as well as one of his fellow A Dog’s Purpose screenwriters – Cathryn Michon.

Among those in the ensemble cast are Juliet Rylance as Ethan’s mother and  Luke Kirby as his taciturn dad. As a teenager Ethan is played by KJ Apa, while Ethan’s girlfriend Hannah is a role filled Britt Robertson (Tomorrowland). Later, as adults, Ethan and Hannah come in the guise of Dennis Quaid (The Rookie) and Peggy Lipton (Twin Peaks).

Bailey is reborn in the body of Ellie, a German Shepherd K-9 first responder with the Chicago Police Department, owned by Carlos (John Ortiz – American Gangster). He returns as a Corgi named Tino, owned by lonely single college girl Maya (Kirby Howell-Baptiste), who falls for Al (Pooch Hall). Nicole Laplaca and Primo Allon are the neglectful owners of Buddy, a Shepherd/St Bernard cross.

A Dog’s Purpose starts out with purpose and then loses its way. At times I felt like I was watching a quirky version of a Nicholas Sparks’ book turned into yet another film. After building a solid storyline and character connection with his initial episode, Hallström changes tack – as Cameron’s novel calls for – time and again, before circling around somewhat clumsily and predictably to where he began.

In and of themselves any one story could have carried the day, but the second, third and fourth chapters were relatively small vignettes, in which the traction he initially created was lost. I certainly didn’t buy into the dog being reborn as different sexes and breeds. I wasn’t fully sold on the narration either, which was meant to be the dogs’ take on their lives. It was pretty basic and largely uninteresting.

Given the subject matter and our affinity to dogs, I was left a little disappointed by the film. Even when it comes to learning just what a dog’s purpose is, the one liner fails to ignite. Still, the movie has its cute moments and animal lovers will find enough here to smile/cry about. Rated PG, A Dog’s Purpose scores a 6 out of 10.