With overtures of Schindler’s List, The Zookeeper’s Wife is based upon fact. It is the true story of gentiles who put  everything on the line to save hundreds of Jews from annihilation during the Holocaust.

Warsaw in Poland in 1939 was a very, very dangerous place to be. It was where Antonina Żabińska (Jessica Chastain) and her husband, Dr Jan Żabiński (Johan Heldenbergh) were running a zoo. Devoted to each other and to their young son, the couple thrived as personal and professional partners. Warsaw Zoo flourished under Jan’s stewardship and Antonina’s care. With reserves of energy, Antonina rose every day to tend to both her family and their menagerie. That, though, was before the Germans invaded and bombed the zoo. 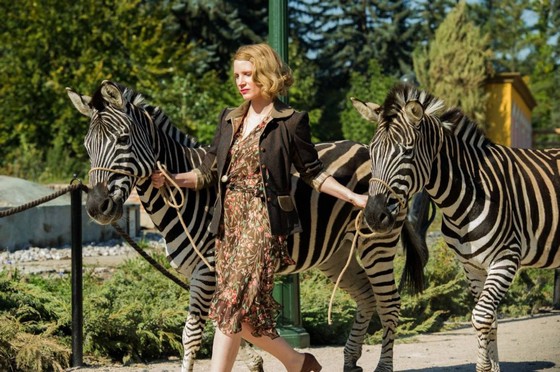 Stunned, the couple was forced to report to the Reich’s newly appointed chief zoologist, Lutz Heck (Daniel Brühl). Antonina and Jan fought back on their own terms and covertly began working with the Resistance. They realised that their zoo’s abandoned animal cages and underground tunnels, originally designed to safeguard animal life, could now secretly be used for humans.

Niki Caro (Whale Rider) directs the movie from a screenplay by Angela Workman, adapted from Diane Ackerman’s nonfiction book of the same name, which was based upon Antonina Żabińska’s wartime diaries. The Zookeeper’s Wife, then, is a film written and directed by women, about an unheralded female heroine. It took a decade to make it to the big screen.

In 2007, producer Diane Miller Levin was given Diane Ackerman’s book as a gift by her husband. She read it in just one night sitting on her stairwell. Her producing partner Robbie Rowe Tollin was also inspired by it. They committed to adapting it into a movie. Ackerman’s book provided in-depth research to place Antonina and her husband in the wider historical context of Polish resistance to Nazi oppression during the Second World War.

But Robbie Rowe Tollin maintains that “what sets this apart from other WWII histories is that it is an intimate story between a husband and wife. “We were fascinated at how it was about a family fighting to keep their everyday life, and marriage, healthy amidst a war.” Israel would later honor the Żabińskis, but the couple remained modest about their achievements.

While elements of the fear, heartache and heartbreak are palpable in The Zookeeper’s Wife, I found some scenes more believable than others, which seemed sugar coated. The three leads were strong. Jessica Chastain and Daniel Brühl are always compelling on screen and so it is here. Brühl, in particular, has made a name for himself as a most credible and sinister villain.

The story is quite remarkable (if you didn’t know it to be real, you would swear it is the work of an overactive imagination) and so readily translates to the screen. Who would have thought that the owners of a zoo would play such an important role in the darkest days of Polish history? And yet, that they most certainly did in the face of overwhelming odds.

While A Zookeeper’s Wife doesn’t have the same gravitas of films like Son of Saul, The Pianist, Schindler’s List or The Boy in Striped Pyjamas, it is still a noteworthy drama. Rated M, it scores a 6½ out of 10.