While looking at the film poster, the first thing I thought was: “Wow, Halle Berry has a thing for films about kidnapping”. First, there was The Call. And then at the beginning of the year, I saw Kidnap. And now it’s a film about human trafficking. In particular, the kidnapping of young women who then end up in a network of prostitution and terrible abuse. But soon I realized I was completely wrong. The woman in question wasn’t Halle Berry. But damn, she looks disturbingly a lot like Halle. Now, I didn’t like Kidnap very much. I thought it was outright irritating at times. Traffik is, despite a different lead (Paula Patton), of the same level. 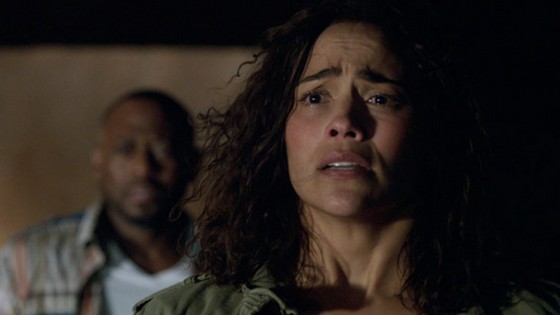 The acting in itself wasn’t that bad at all. Perhaps a bit simplistic and predictable, but certainly not annoying. The characters make some stupid decisions; but that’s typical for these kinds of films, I suppose. Lovebirds Brea (Paula Patton) and John (Omar Epps) are both nice looking persons and form a beautiful couple. John arrives one day with a classic car as a birthday present and takes Brea on a surprise weekend. But you already know this peaceful scene is doomed to turn into a fiasco.

First, a motorcycle gang harasses them in a gas station. Next, super-jerk Darren (Laz Alonso), an egotistical sports agent, shows up, ruining their fantastic weekend of love. And as icing on the cake, there’s a satellite phone, with a series of disturbing pictures of abused young women, inexplicably ending up in Brea’s handbag.

If only they’d stuck to the idea of making a disconcerting film about sex trafficking, it might have been interesting. But turning it into some kind of Hollywood spectacle, with story twists you could see coming from half a world away and an improbable denouement, wasn’t such a hot idea.

Human trafficking is a deadly serious subject and a despicable type of crime that needs to be tackled seriously. The fact they try to make people aware of this widespread problem, I can accept. But in the end, this was nothing more than a cheap B-movie about the abuse and exploitation of women in networks. You Were Never Really Here also brings up this issue, but there it concerns networks with minors. And that message was loud and clear. Traffik just uses the cheap solution of showing statistics about the number of women abducted in the US. In other words, I wasn’t really impressed by this film.