The despicable nature of workplace harassment comes into sharp focus in The Assistant, a thinly-veiled take on the Harvey Weinstein scandal. 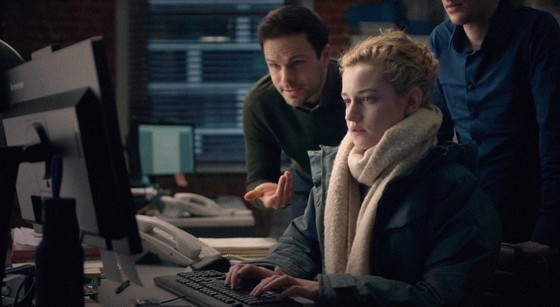 Jane (Julia Garner) is the savvy personal assistant to the chairman of a film studio. In the job only five weeks, she completes largely dreary tasks and works long hours. First in the office before dawn, she’s also the last to leave after dark. The Assistant portrays one day in her life. It’s a job Jane needs – her ambition is to become a film producer. But the way she’s treated and what she’s exposed to are contemptible. What Jane hears and sees while in the “bull pit” provides the film’s crisis point. When she tries to do the right thing by “exposing” what’s going on behind closed doors, she’s quickly put in her place. Effectively a protection racket shields all around her. Her dismay, disappointment and sadness are written all over her face.

Inspired by real life stories, The Assistant is Australian documentarian Kitty Green’s first narrative feature (she is writer, director, co-editor and producer). It’s a fictional representation of insidious workplace culture. The Assistant is slow moving, so you need to stick with to get the most out of it.

In a highly demanding role, Garner is in every scene … and she nails the part.

The Assistant is a searing, all-too-real story about the misuse of power. It examines just how hard it is to swim against the tide … to stand up for what’s right.  This is inevitably going to be a small audience film due to its lack of “action” and concentration on the mundane; but I admired the way the movie makes its unmistakable point. The Assistant is a call to arms, which has been encapsulated by the #MeToo movement. It is an indictment of a system as that has proliferated and been perpetuated for far too long. It is about abuse and exploitation.

You can see it now on Foxtel on Demand and it will be available on 24th June on Google Play, iTunes, Fetch TV, Telstra Bigpond, Sony Playstation, Microsoft and Quickfix.